Thousands of years ago, variola virus (smallpox virus) emerged and began causing illness and deaths in human populations, with smallpox outbreaks occurring from time to time. Thanks to the success of vaccination, the last natural outbreak of smallpox in the United States occurred in 1949.cdc.com

How is it transmitted?

Humans are infected with the variola virus by coming in touch with droplets of a smallpox-infected patient. A healthy person can become infected if they inhale fluid droplets from another infected individual (e.g. through coughing or sneezing).

While an infection of the variola minor virus would lead to death with a probability of less than one percent, the case fatality rate of the variola major virus has been estimated to be around 30 percent.4

The specific way a smallpox infection would lead to a patient’s death remains unclear.5

Death usually occurred 10 to 16 days after the onset of symptoms.7

If a patient successfully fought off the infection and survived, (s)he would never catch smallpox again. A side effect of the body’s fight against the variola virus was that memory cells were produced that were able to quickly detect and activate killer cells for any variola viruses that a survivor encountered in the future.

There was never a treatment for smallpox. Once a person was infected it was impossible to treat them; one could only helplessly let the disease run its course. It might be possible that modern antiviral drugs would now allow a treatment of the disease if the disease still existed: The Centers for Disease Control and Prevention (CDC)8 now lists three antiviral drugs as potential treatment options, but since they have never been tested on infected humans, their effectiveness remains unknown.ourworldindata.org

In 1980, the World Health Assembly declared smallpox eradicated (eliminated), and no cases of naturally occurring smallpox have happened since.

Smallpox research in the United States continues and focuses on the development of vaccines, drugs, and diagnostic tests to protect people against smallpox in the event that it is used as an agent of bioterrorism.cdc.com 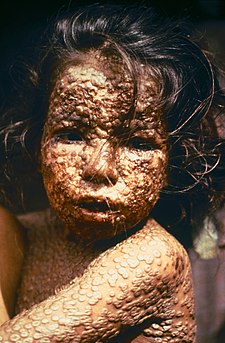 A child with smallpox in Bangladesh in 1973. The bumps filled with thick fluid and a depression or dimple in the center are characteristic. Commons

The initial symptoms of the disease included fever and vomiting.This was followed by formation of sores in the mouth and a skin rash.Over a number of days the skin rash turned into characteristic fluid-filled bumps with a dent in the center.The bumps then scabbed over and fell off, leaving scars. The disease was spread between people or via contaminated objects. Prevention was primarily by the smallpox vaccine. Once the disease had developed, certain antiviral medication may have helped.

The origin of smallpox is unknown. The earliest evidence of the disease dates to the 3rd century BCE in Egyptian mummies. The disease historically occurred in outbreaks. In 18th-century Europe, it is estimated that 400,000 people died from the disease per year, and that one-third of all cases of blindness were due to smallpox. These deaths included six monarchs. Smallpox is estimated to have killed up to 300 million people in the 20th century and around 500 million people in the last 100 years of its existence. As recently as 1967, 15 million cases occurred a year.

Inoculation for smallpox appears to have started in China around the 1500s. Europe adopted this practice from Asia in the first half of the 18th century. In 1796 Edward Jenner introduced the modern smallpox vaccine. In 1967, the WHO intensified efforts to eliminate the disease. Smallpox is one of two infectious diseases to have been eradicated, the other being rinderpest in 2011.The term “smallpox” was first used in Britain in the early 16th century to distinguish the disease from syphilis, which was then known as the “great pox”. Other historical names for the disease include pox, speckled monster, and red plague. Commons

This hypothesized origin was supported by archeologists finding “dome-shaped vesicles […] similar to those found in smallpox” on three mummies whose skin, bones and muscles were preserved thanks to the Egyptian mummification practice. One of these was Pharaoh Ramses V who died in 1157 BCE.

The photograph of his skull below clearly shows small pustules, especially on his cheeks. At the time of the mummy’s discovery,  electron microscopy was unfortunately not yet available. This analysis would have allowed for a definite diagnosis; authorities have not allowed investigators to extract tissue samples from the mummies since then.

Ramses V is believed to be the first known victim of smallpox after examining the pustules found on his cheeks.

4 thoughts on “The Historical Smallpox – Its Outbreak and Impacts”