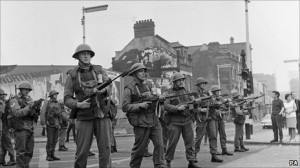 The British Army, deployed to restore order in Belfast in 1969.

In the latest in our series of overviews, a summary of ‘The Troubles’, by John Dorney

The Northern Ireland conflict was a thirty year bout of political violence, low intensity armed conflict and political deadlock within the six north-eastern counties of Ireland that formed part of the United Kingdom of Great Britain and Northern Ireland.

It was a complex conflict with multiple armed and political actors. It included an armed insurgency against the state by elements of the Catholic or nationalist population, principally waged by the Provisional Irish Republican Army (IRA) , though it also included other republican factions, with the aim of creating a united independent Ireland.

Arrayed against the IRA were a range of state forces –the Royal Ulster Constabulary or RUC, the regular British Army and a locally recruited Army unit, the Ulster Defence Regiment (UDR).

The Northern Ireland conflict had elements of insurgency, inter-communal violence and at times approached civil war

Another angle of the conflict was sectarian or communal violence between the majority unionist or loyalist Protestant population and the minority Catholic or nationalist one. This was manifested in inter-communal rioting, house burning and expulsion of minorities from rival areas as well as lethal violence including shooting and bombing.

Arising from the loyalist community were a number of paramilitary groups, notably the Ulster Defence Association (UDA) and the Ulster Volunteer Force (UVF). Loyalist violence’s stated aim was to halt republican violence against the state but in practice their main target was Catholic civilians. Though not the principle focus of their campaign, republicans also killed significant numbers of Protestant civilians.

The IRA called a ceasefire in 1994, followed shortly afterwards by the loyalist groups, leading to multi-party talks about the future of Northern Ireland. The conflict was formally ended with the Belfast or Good Friday Agreement of 1998. 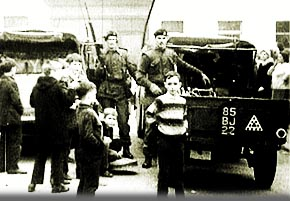 The conflict in Northern Ireland was generally referred to in Ireland during its course as ‘The Troubles’ – a euphemistic folk name that had also been applied to earlier bouts of political violence.

This name had the advantage that it did not attach blame to any of the participants and thus could be used neutrally. Republicans, particularly supporters of the Provisional IRA referred to the conflict as ‘the war’, and portrayed it as a guerrilla war of national liberation.

Unionists and the British government referred to the long running political violence as a law and order problem of ‘terrorism’. The London government portrayed the role of state forces as being primarily of peace-keeping between the ‘two communities’.

The death toll never reached 1,000 in a year, making it a ‘low intensity conflict’.

The violence never reached the most common currently agreed threshold of a ‘war’ – over 1,000 deaths in a year. Nevertheless its impact on society in Northern Ireland – an enclave with a population of about 1.5 million – was considerable, with over 3,500 killed and up to 50,000 injured over a thirty year period. 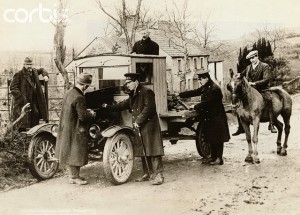 Northern Ireland’s existence was confirmed under the Anglo-Irish Treaty of 1921, that ended the Irish War of Independence. In 1925, a boundary commission that had been expected to cede large parts of Northern Ireland to the Irish Free State proposed no major changes. Even its limited modifications were never implemented and the border stayed as it was.

From 1922 until 1972, Northern Ireland functioned as a self-governing region of the United Kingdom. The Unionist Party formed the government, located at Stormont, outside Belfast, for all of these years. Its power was buttressed by a close association with the Protestant fraternal organisations such as the Orange Order.

Northern Ireland was created in 1920 for unionists who did not want to be part of a self-ruled Ireland, but contained a substantial minority of Catholic nationalists.

Catholics  complained of systematic discrimination in Northern Ireland. Their voting strength was diluted by ‘gerrymandering’ –where Catholics were grouped in one constituency so they would elect a smaller number of representatives in proportion to their numbers. Additionally, in local government, only rate payers, who were more often Protestants than Catholics, had a vote.

Catholics also complained of discrimination in employment and the allocation of social housing, and also protested that their community was the main target of the Special Powers Act which allowed for detention without trial. The armed police forces, the Royal Ulster Constabulary and especially the Ulster Special Constabulary or ‘B Specials’, were almost wholly Protestant and unionist in ethos.

The unionists buttressed their political power with systematic discrimination against Catholics.

There was also a lack of official recognition of Irish nationality in Northern Ireland. The Irish language and Irish history were not taught in state schools. The tricolour flag of the Irish Republic was illegal, as was the Irish Republican party, Sinn Fein (from 1956 until 1974), though it organised in Northern Ireland under the names ‘Republican’ or ‘Republican Clubs’. However most nationalists in the North traditionally voted for the moderate Nationalist Party.

There was an ineffective, mostly southern-based IRA guerrilla campaign against Northern Ireland from 1956 to 1962, but with little nationalist support within the North and faced with internment on both sides of the border, it achieved little.

There were signs of a thaw in relations between north and south and between nationalists and unionists in the 1960s with reciprocal visits by Northern Ireland Prime Minister Terence O’Neill and Irish Taoiseach Sean Lemass, the first since 1922. O’Neill also proposed reforms within Northern Ireland. However O’Neill came under fierce criticism from unionist hardliners such as charismatic Presbyterian preacher Ian Paisley. 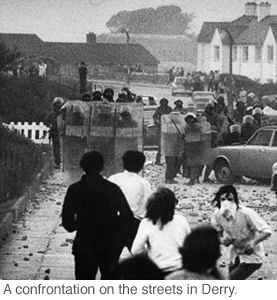