The NOI was founded in Detroit on July 4, 1930, by Wallace Fard Muhammad, also known as W. D. Fard Muhammad, in order to, as the Nation of Islam states, “teach the downtrodden and defenseless Black people a thorough Knowledge of God and of themselves, and to put them on the road to Self-Independence with a superior culture and higher civilization than they had previously experienced.”[13] The NOI teaches that W. Fard Muhammad was both the “Messiah” of Judaism and the Mahdi of Islam. Fard chose his assistant minister, Elijah Muhammad, in 1931 to succeed him as head of the movement, calling Muhammad “His Divine Representative”. Fard trained Muhammad night and day for 3½ years before he took over NOI in 1934. 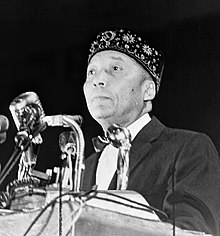 Muslim parents agreed with the foundation of these new schools, but the Michigan State Board of Educationdid not. Muslim teachers were charged with contributing to the delinquency of minors and jailed. The charges were later dropped and the teachers were freed; Muhammad was given six months probation to relocate the children to a standard state school, but he refused because the classes were predominantly taught by white Christians. Muhammad left for Chicago in September of that year.[clarification needed] He was soon joined by W. D. Fard Muhammad, who was run out of Detroit by the police.[14]

In 1942, during World War II, Elijah Muhammad was convicted of violating the Selective Service Act and jailed. Many other Nation of Islam members were similarly charged, as NOI opposed serving in the United States military. Upon his release in 1946, Elijah Muhammad slowly built up the membership of his movement through recruitment in the postwar decades. His program called for the establishment of a separate nation for black Americans and the adoption of a religion based on the worship of Allah and on the belief that blacks were his chosen people.[14][15]

During this time, the Nation of Islam attracted Malcolm Little. While in prison in Boston for burglary from 1946 to 1952, Little joined the Nation of Islam. He was influenced by his brother, Reginald, who had become a member in Detroit. Little quit smoking, gambling and eating pork, in keeping with the Nation’s practices and dietary restrictions. He spent long hours reading books in the prison library. He sharpened his oratory skills by participating in debating classes. Following Nation tradition, Elijah Muhammad ordered him to replace his surname, “Little”, with an “X”, a custom among Nation of Islam followers who considered their surnames to have been imposed by white slaveholders after their African names were taken from them.[16]

Malcolm X rose rapidly to become a minister and national spokesperson for the NOI. Highly influenced by Malcolm X’s membership, the Nation claimed a membership of 30,000.[when?] In March 1964, Malcolm X was excommunicated from the Nation due to disagreements with Elijah Muhammad; among other things, Malcolm X found issues with Muhammad’s lack of adherence to Muslim teachings, and Malcolm X’s fame had led to media attention and a Federal Bureau of Investigation (FBI) infiltration into the Nation of Islam.[16] In April 1964, one month later, Malcolm X founded Muslim Mosque Inc., stating, “I never left the Nation of Islam of my own free will. It was they who conspired with Captain Joseph here in New York to pressure me out of the Nation.”[17] In March 1966, three NOI members were convicted of assassinating Malcolm X.[18][19] 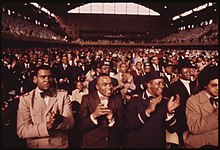 In 1955, Louis Wolcott joined the Nation of Islam.[20] Following custom, he also replaced his surname with an “X”. He was given his new name, “Farrakhan”, by Elijah Muhammad. In 1965, following the assassination of Malcolm X, Farrakhan emerged as the protege of Malcolm. Like his predecessor, Farrakhan was a dynamic, charismatic leader and a powerful speaker with the ability to appeal to the African-American masses.[21]

At the time of Elijah Muhammad’s death in 1975, there were 75 NOI centers across America.[22] The Nation’s leadership chose Wallace Muhammad, also known as Warith Deen Mohammad, the fifth of Elijah’s sons – not Farrakhan – as the new Supreme Minister. At the time, Nation of Islam was founded upon the principles of self-reliance and black supremacy, a belief that mainstream Muslims consider heretical.[23] He shunned his father’s theology and black pride views, forging closer ties with mainstream Muslim communities in an attempt to transition the Nation of Islam into orthodoxy more similar to Sunni Islam.[24] Under W. D. Mohammed’s leadership, the Nation of Islam decentralized into many bodies of followers led by many different leaders. This made it hard to track the exact number of NOI members, but it is estimated to have been in the tens of thousands.[25]

In 1977, Farrakhan resigned from Wallace Muhammad’s reformed organization. He worked to rebuild the Nation of Islam upon the original foundation established by Wallace Fard Muhammad and Elijah Muhammad. Farrakhan traveled across America speaking in cities to gain new followers. Over time, Farrakhan regained many of the Nation of Islam’s original properties. There are now mosques and study groups in over 120 American cities attributed to Farrakhan’s work as a leader.[26]

In 1995, the Nation of Islam sponsored the Million Man March in Washington, D.C. to promote African-American unity and family values. Estimates of the number of marchers were given between 400,000 and 840,000. Under Farrakhan’s leadership, the Nation of Islam tried to redefine the standard “black male stereotype” of drug and gang violence. Meanwhile, the Nation continued to promote social reform in African-American communities according to its traditional goals of self-reliance and economic independence.[26]

Under Farrakhan’s leadership, the Nation was one of the fastest growing of the various political movements in the country. Foreign branches of the Nation were formed in Ghana, London, Paris, and the Caribbean islands. In order to strengthen the international influence of the Nation, Farrakhan attempted to establish relations with Muslim countries. He was diagnosed with prostate cancer in 1991 and experienced a near-death experience in 2000 due to complications. After that experience, Farrakhan toned down the politics of NOI and attempted to strengthen relations with other minority communities, including Native Americans, Hispanics, and Asians.[26]

On May 8, 2010, Farrakhan publicly announced his embrace of Dianeticsand has actively encouraged Nation of Islam members to undergo auditingfrom the Church of Scientology.[27][28]

Since the announcement in 2010, the Nation of Islam has been hosting its own Dianetics courses and its own graduation ceremonies. At the third such ceremony, which was held on Saviours’ Day 2013, it was announced that nearly 8500 members of the organization had undergone Dianetics auditing. The organization announced it had graduated 1,055 auditors and had delivered 82,424 hours of auditing. The graduation ceremony was certified by the Church of Scientology, and the Nation of Islam members received certification. The ceremony was attended by Shane Woodruff, vice-president of the Church of Scientology‘s Celebrity Centre International. He stated that, “[t]he unfolding story of the Nation of Islam and Dianetics is bold, [i]t is determined and it is absolutely committed to restoring freedom and wiping hell from the face of this planet.”[12]