Organized crime in Italy and its criminal organizations have been prevalent in Italy, especially Southern Italy, for centuries and have affected the social and economic life of many Italian regions since at least the 19th century.

There are five major native mafia-like organizations currently operating and heavily active in Italy. Among the oldest and most powerful of these organizations, having started to develop between 1500 and 1800, include: Cosa Nostra (the original “Mafia” or the Sicilian Mafia) of Sicily; ‘Ndrangheta of Calabria (who are considered to be among the biggest cocaine smugglers in Europe); and Camorra of Naples.

In addition to the historic organizations, there are also others founded in the 20th century: the Stidda of Sicily and Sacra Corona Unita of Apulia.

More recently, another criminal organization was discovered, known to the media as the Società foggiana, which is an split of the Sacra Corona Unita, and is strongly active in the Province of Foggia. According to the media, it is considered as one of the most brutal and bloody of all the organized crime groups in Italy.

The Neapolitan Camorra and the Calabrian ‘Ndrangheta are active throughout Italy, having presence also in other countries.
The Sicilian Mafia, also known as simply the Mafia and frequently referred to by its members as Cosa Nostra (Italian: [ˈkɔːza ˈnɔstra, ˈkɔːsa -], Sicilian: [ˈkɔːsa ˈnɔʂː(ɽ)a]; “our thing”), is an Italian, Mafia-terrorist-type,[organized crime syndicate originating in the region of Sicily, dating to the 19th century.

It is a loose association of criminal groups that share a common organisational structure and code of conduct. The basic group is known as a “family”, “clan”, or cosca.[5] Each family claims sovereignty over a territory, usually a town or village or a neighbourhood (borgata) of a larger city, in which it operates its rackets. Its members call themselves “men of honour”, although the public often refers to them as mafiosi.

The Mafia’s core activities are protection racketeering, the arbitration of disputes between criminals, and the organizing and oversight of illegal agreements and transactions.

By the 20th century, following wide-scale emigration from Sicily, the organization acquired a strong presence in other countries in North and South America. wiki 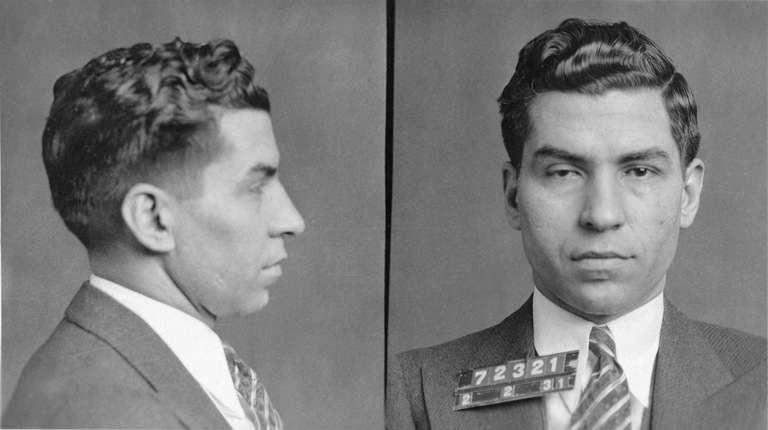 Giuseppe Esposito was the first known Sicilian Mafia member to emigrate to the U.S. He and six other Sicilians fled to New York after murdering the chancellor and a vice chancellor of a Sicilian province and 11 wealthy landowners. He was arrested in New Orleans in 1881 and extradited to Italy.

New Orleans was also the site of the first major Mafia incident in this country. On October 15, 1890, New Orleans Police Superintendent David Hennessey was murdered execution-style. Hundreds of Sicilians were arrested, and 19 were eventually indicted for the murder. An acquittal generated rumors of widespread bribery and intimidated witnesses. Outraged citizens of New Orleans organized a lynch mob and killed 11 of the 19 defendants. Two were hanged, nine were shot, and the remaining eight escaped.

The American Mafia has evolved over the years as various gangs assumed, and lost, dominance over the years—for example, the Black Hand gangs around 1900, the Five Points Gang in the 1910s and ‘20s in New York City, and Al Capone’s Syndicate in Chicago in the 1920s. It was not until 1951 that a U.S. Senate committee led by Democrat Estes Kefauver of Tennessee determined that a “sinister criminal organization,” later known as La Cosa Nostra, operated in this nation. Six years later, The New York State Police uncovered a meeting of major La Cosa Nostra figures from around the country in the small upstate New York town of Apalachin. Many of the attendees were arrested. The event was the catalyst that changed the way law enforcement battles organized crime.

By the end of the ‘20s, two primary factions had emerged in the Italian criminal groups in New York. Joseph Masseria, who controlled the groups, sparked the so-called “Castellammarese War” in 1928 when he tried to gain control of organized crime across the country. The war ended in 1931 when Salvatore Maranzano conspired with Masseria’s top soldier, Charles “Lucky” Luciano, to have Masseria killed. Maranzano emerged as the most powerful Mafia boss in the nation, setting up five separate criminal groups in New York and calling himself “Boss of Bosses.”

Maranzano was the first leader of the organization now dubbed “La Cosa Nostra.” He established its code of conduct, set up the “family” divisions and structure, and enacted procedures for resolving disputes. Two of the most powerful La Cosa Nostra families—known today as the Genovese and Gambino families—emerged from Maranzano’s restructuring efforts. He named Luciano the first boss of what would later be known as the Genovese family. Luciano showed his appreciation less than five months later by sending five men dressed as police officers to Maranzano’s office to murder him.

With Maranzano out of the way, Luciano become the most powerful Mafia boss in America and used his position to run La Cosa Nostra like a major corporation. Luciano set up the “Commission” to rule all La Cosa Nostra activities. The Commission included bosses from seven families and divided the different rackets among the families.

In 1936, Luciano was sentenced to 30 to 50 years in prison for operating a prostitution ring. Ten years later, he was released from prison and deported to Italy, never to return. There, he became a liaison between the Sicilian Mafia and La Cosa Nostra. When he was convicted, Frank Costello became acting boss because underboss Vito Genovese had fled to Italy to avoid a murder charge. Genovese’s return to the states was cleared when a key witness against him was poisoned and the charges were dropped.

Costello led the family for approximately 20 years until May of 1957, when Genovese took control by sending soldier Vincent “the Chin” Gigante to murder him. Costello survived the attack but relinquished control of the family to Genovese, who named it after himself. Attempted murder charges against Gigante were dismissed when Costello refused to identify him as the shooter. In 1959, it was Genovese’s turn to go to prison following a conviction of conspiracy to violate narcotics laws. He received a 15-year sentence but continued to run the family through his underlings from his prison cell in Atlanta, Georgia.

About this time, Joseph Valachi (pictured right), a “made man,” was sent to the same prison as Genovese on a narcotics conviction. Labeled an informer, Valachi survived three attempts on his life behind bars. Still in prison in 1962, he killed a man he thought Genovese had sent to kill him. He was sentenced to life for the murder.

The sentencing was a turning point for Valachi, who decided to cooperate with the U.S. government. Recruited by FBI agents, he appeared before the U.S. Senate Permanent Subcommittee on Investigations on September 27, 1963 and testified that he was a member of a secret criminal society in the U.S. known as La Cosa Nostra. He revealed to the committee numerous secrets of the organization, including its name, structure, power bases, codes, swearing-in ceremony, and members.

In 1969, several years after Valachi began cooperating with the FBI, Vito Genovese died in his prison cell. By then the Genovese family was under the control of Philip “Benny Squint” Lombardo. Unlike the bosses before him, Lombardo preferred to rule behind his underboss. His first, Thomas Eboli, was murdered in 1972. Lombardo then promoted Frank “Funzi” Tieri as his front man. 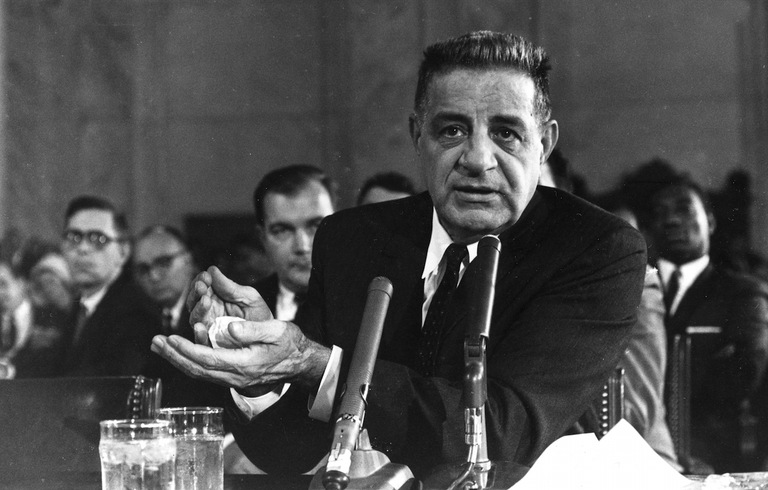 Throughout the 1980s, the Genovese family hierarchy went through several changes. Tieri, recognized on the street as the Genovese family boss in the late 1970s, was convicted for operating a criminal organization through a pattern of racketeering that included murder and extortion.

Anthony “Fat Tony” Salerno then fronted as boss until 1985, when he and the bosses of the other four New York families were convicted for operating a criminal enterprise—the LCN Commission. Lombardo, his two captains in prison and his health failing, turned full control of the Genovese family over to Gigante—the man who tried to kill Costello 30 years earlier.

Fish on the Hook

In 1986, a second member turned against the Genovese family when Vincent “Fish” Cafaro, a soldier and right-hand-man to Anthony Salerno, decided to cooperate with the FBI and testify. According to Cafaro’s sworn statement, Gigante ran the family from behind the scenes while pretending to be mentally ill. Cafaro said this behavior helped further insulate Gigante from authorities while he ran the Genovese family’s criminal activities.

Gigante’s odd behavior and mumbling while he walked around New York’s East Village in a bathrobe earned him the nickname “the Odd Father.” After an FBI investigation, Gigante was convicted of racketeering and murder conspiracy in December 1997 and sentenced to 12 years. Another FBI investigation led to his indictment on January 17, 2002, accusing him of continuing to run the Genovese family from prison.

He pled guilty to obstruction of justice in 2003. Gigante died in prison in December 2005 in the same federal hospital where Gambino family leader John Gotti had died three years earlier.

The Genovese crime family was once considered the most powerful organized crime family in the nation. Members and their numerous associates engaged in drug trafficking, murder, assault, gambling, extortion, loansharking, labor racketeering, money laundering, arson, gasoline bootlegging, and infiltration of legitimate businesses. Genovese family members also were involved in stock market manipulation and other illegal frauds and schemes, as evidenced in the FBI’s “Mobstocks” investigation.