On May 4, 1972, after a ten-day break from writing, Bremer realized it would be almost impossible to assassinate Nixon, and decided that it was Wallace’s “fate” to be his victim, even though his diary entries never showed the same level of interest or enthusiasm as they did with regard to assassinating Nixon. Bremer made this clear in his diary writing “He (Wallace) certainly won’t be buried with the snobs in Washington. . . . I won’t even rate a TV interruption in Russia or/Europe when the news breaks— they never heard of Wallace.”

The following day, he checked out two books from the public library in Milwaukee, both detailing the assassination of Senator Robert F. Kennedy by Sirhan Sirhan: Sirhan by Aziz Shihab and “R.F.K. Must Die!” by Robert Blair Kaiser.

Despite his lack of enthusiasm, early on the morning of May 9, 1972 Bremer took a car ferry to Ludington, Michigan and visited the Wallace campaign headquarters in Silver Lake, Michigan and offered to be a volunteer. The evening after that, he attended a Wallace rally in Lansing. Two nights later, he was present at a Wallace rally in Cadillac and stayed overnight at the Reid Hotel in Kalamazoo.[citation needed]

On the afternoon of May 13, Kalamazoo Police received an anonymous phone call saying a suspicious looking person had been sitting in a car near the National Guard Armory. When questioned, Bremer said he was waiting for the Wallace rally to begin and wanted to get a good seat. Bremer was photographed at the rally that evening, where he had a clear opportunity to shoot his target, but, according to his diary, he did not do so because he might have shattered some glass and blinded some “stupid 15-year-olds” who stood nearby.[citation needed]

Short of money and unable to afford a hotel room, Bremer slept in his car for the following two nights, as he had done on some nights the previous week. He made his final diary entry on May 14, 1972, when he drove to Maryland.[citation needed]

Shooting
Bremer turned up in Wheaton, Maryland, for a noon appearance which Wallace made at Wheaton Plaza, during a shopping center rally on May 15, 1972. He was dressed in dark glasses; patriotic red, white, and blue; and was wearing his new campaign button which said “WALLACE in ’72”.

He strongly applauded Wallace, in contrast with many others present, who heckled and taunted the speaker. Two tomatoes were thrown at Wallace during the rally, but missed. Based on this reception, Wallace refused to shake hands with anyone present, denying Bremer the opportunity to carry out his plan.[10]

At a second rally, which took place at Laurel Shopping Center, 16 miles away in Laurel, Maryland, there was minor heckling but it did not last. About 1,000 people were present; they were mostly quiet and it was generally a friendly crowd. After he had finished speaking, Wallace shook hands with some of those present, against the advice of his Secret Service guards.

At approximately 4 p.m., Bremer pushed his way forward, aimed his .38 revolver at Wallace’s abdomen and opened fire, emptying the weapon before he could be subdued. He hit Wallace four times. Wallace fell back and lost a pint of blood, going into a mild state of shock.

One bullet lodged in his spinal cord. The other bullets hit Wallace in the abdomen and chest. Three other people present were wounded unintentionally: Alabama State Trooper Captain E. C. Dothard (Wallace’s personal bodyguard), who was shot in the stomach, Dora Thompson (a campaign volunteer) who was shot in the leg, and Nick Zarvos, a Secret Service agent. Zarvos was shot in the neck, and his speech was severely impaired following the shooting.

Bremer had planned to yell his carefully chosen catchphrase, “A Penny For Your Thoughts!”, as he shot Wallace. However, in the heat of the assassination attempt, he forgot to do so.

After emptying his revolver, Bremer was wrestled to the ground and then arrested. Bremer himself was taken to a hospital for treatment of a head wound. Just after midnight, he was arraigned and taken to the Baltimore County Jail, where he would be held for the next two months.

Upon searching it, police described Bremer’s car as a “hotel on wheels”. In it they found blankets, pillows, a blue steel 9mm 13-shot Browning Hi-Power Semi-automatic Pistol, binoculars, a woman’s umbrella, a tape recorder, a portable radio with police band, an electric shaver, photographic equipment, a garment bag with several changes of clothes, a toilet kit, and a 1972 copy of a Writers’ Yearbook and the two books he had borrowed from the Milwaukee public library ten days earlier.

Within hours of the assassination attempt, then-President Richard M. Nixon and a top aide dispatched a political operative, E. Howard Hunt, who rushed to Milwaukee, with plans to surreptitiously enter Bremer’s apartment, and plant the campaign literature of Democratic contender George McGovern’s campaign as a means to drive Wallace supporters away from the Democratic Party and toward Nixon and Republican candidates. Hunt aborted his clandestine operation after the FBI had already sealed off Bremer’s apartment prior to his arrival.

George Corley Wallace Jr. (August 25, 1919 – September 13, 1998) was an American Democratic Party politician who served as the 45th Governor of Alabama for four terms. 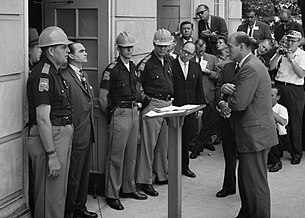 Attempting to block integration at the University of Alabama, Governor of Alabama George Wallace stands at the door of Foster Auditorium while being confronted by U.S. Deputy Attorney General Nicholas Katzenbach.

He is best remembered for his staunch segregationist and populist views.During his tenure, he promoted “low-grade industrial development, low taxes, and trade schools”.

He sought the United States presidency as a Democrat three times, and once as an American Independent Partycandidate, unsuccessfully each time.

Wallace opposed desegregation and supported the policies of “Jim Crow” during the Civil Rights Movement, declaring in his 1963 inaugural address that he stood for “segregation now, segregation tomorrow, segregation forever”. In 1965, Martin Luther King Jr. called Wallace “perhaps the most dangerous racist in America today”.

Born in Clio, Alabama, Wallace attended the University of Alabama School of Law and served in United States Army Air Corps during World War II. After the war, he won election to the Alabama House of Representatives and served as a state judge. Wallace first sought the Democratic nomination in the 1958 Alabama gubernatorial election. Initially a moderate on racial issues, Wallace adopted a hard-line segregationist stance after losing the 1958 nomination.

Wallace ran for governor again in 1962, and won the race. Seeking to stop the racial integration of the University of Alabama, Wallace earned national notoriety by standing in front of the entrance of the University of Alabama, blocking the path of black students. Wallace left office after one term due to term limits, but his wife, Lurleen Wallace, won the next election and succeeded him, though he was the de facto governor.

Wallace challenged sitting President Lyndon B. Johnson in the 1964 Democratic presidential primaries, but Johnson prevailed in the race. In the 1968 presidential election, Wallace ran a third party campaign in an attempt to force a contingent election in the United States House of Representatives, thereby enhancing the political clout of segregationist Southern leaders. Wallace won five Southern states but failed to force a contingent election.

As of 2020 he remains the most recent third-party candidate to receive pledged electoral college votes from any state. Wallace won election to another term as Governor of Alabama in 1970 and ran in the 1972 Democratic presidential primaries, once again campaigning for segregation.

His campaign effectively ended when he was shot in Maryland by Arthur Bremer, and Wallace remained paralyzed below the waist for the rest of his life.

Bremer was sentenced to 63 years in prison for the shooting, which was later reduced to 53 years following an appeal; he served 35 years of the reduced sentence and was paroled in 2007.

Wallace won re-election as governor in 1974, and he once again unsuccessfully sought the Democratic presidential nomination in the 1976 Democratic presidential primaries. In the late 1970s, Wallace announced that he became a born-again Christian and moderated his views on race, renouncing his past support for segregation. Wallace left office in 1979 but reentered politics and won election to a fourth and final term as governor in 1982. Wallace is the third longest-serving governor in US history, having served 5,848 days in office. Describing his impact on national politics despite his lack of success in presidential races, two biographers termed Wallace “the most influential loser” of 20th-century American politics. Commons

3 thoughts on “WHEN THE AMERICAN, DEMOCRATIC-PARTY POLITICIAN GEORGE WALLACE WAS SHOT”