Arundhati Roy: ‘The pandemic is a portal’ —|
The novelist on how coronavirus threatens India -and what the country, and the world, should do next

On March 24, at 8pm, Modi appeared on TV again to announce that, from midnight onwards, all of India would be under lockdown. Markets would be closed. All transport, public as well as private, would be disallowed.

He said he was taking this decision not just as a prime minister, but as our family elder. Who else can decide, without consulting the state governments that would have to deal with the fallout of this decision, that a nation of 1.38bn people should be locked down with zero preparation and with four hours’ notice? His methods definitely give the impression that India’s prime minister thinks of citizens as a hostile force that needs to be ambushed, taken by surprise, but never trusted.

Locked down we were. Many health professionals and epidemiologists have applauded this move. Perhaps they are right in theory. But surely none of them can support the calamitous lack of planning or preparedness that turned the world’s biggest, most punitive lockdown into the exact opposite of what it was meant to achieve.

The man who loves spectacles created the mother of all spectacles.

A resident wears a face mask in Mumbai, where the usually bustling streets are almost deserted. . . © Varinder Chawla/MEGA

. . . while in Bangalore people queue to buy supplies at a supermarket  © Getty Images

As an appalled world watched, India revealed herself in all her shame — her brutal, structural, social and economic inequality, her callous indifference to suffering. The lockdown worked like a chemical experiment that suddenly illuminated hidden things. As shops, restaurants, factories and the construction industry shut down, as the wealthy and the middle classes enclosed themselves in gated colonies, our towns and megacities began to extrude their working-class citizens — their migrant workers — like so much unwanted accrual.

Many driven out by their employers and landlords, millions of impoverished, hungry, thirsty people, young and old, men, women, children, sick people, blind people, disabled people, with nowhere else to go, with no public transport in sight, began a long march home to their villages. They walked for days, towards Badaun, Agra, Azamgarh, Aligarh, Lucknow, Gorakhpur — hundreds of kilometres away. Some died on the way.”Our towns and megacities began to extrude their working-class citizens like so much unwanted accrual”They knew they were going home potentially to slow starvation.

Perhaps they even knew they could be carrying the virus with them, and would infect their families, their parents and grandparents back home, but they desperately needed a shred of familiarity, shelter and dignity, as well as food, if not love. As they walked, some were beaten brutally and humiliated by the police, who were charged with strictly enforcing the curfew. Young men were made to crouch and frog jump down the highway. Outside the town of Bareilly, one group was herded together and hosed down with chemical spray. A few days later, worried that the fleeing population would spread the virus to villages, the government sealed state borders even for walkers. People who had been walking for days were stopped and forced to return to camps in the cities they had just been forced to leave.

Among older people it evoked memories of the population transfer of 1947, when India was divided and Pakistan was born. Except that this current exodus was driven by class divisions, not religion. Even still, these were not India’s poorest people. These were people who had (at least until now) work in the city and homes to return to.

The jobless, the homeless and the despairing remained where they were, in the cities as well as the countryside, where deep distress was growing long before this tragedy occurred. All through these horrible days, the home affairs minister Amit Shah remained absent from public view.

Migrant workers head towards a highway leading out of New Delhi, hoping to return to their home villages © Rajat Gupta/EPA-EFE/Shutterstock

When the walking began in Delhi, I used a press pass from a magazine I frequently write for to drive to Ghazipur, on the border between Delhi and Uttar Pradesh.

The scene was biblical. Or perhaps not. The Bible could not have known numbers such as these. The lockdown to enforce physical distancing had resulted in the opposite — physical compression on an unthinkable scale. This is true even within India’s towns and cities. The main roads might be empty, but the poor are sealed into cramped quarters in slums and shanties.

Every one of the walking people I spoke to was worried about the virus. But it was less real, less present in their lives than looming unemployment, starvation and the violence of the police. Of all the people I spoke to that day, including a group of Muslim tailors who had only weeks ago survived the anti-Muslim attacks, one man’s words especially troubled me. He was a carpenter called Ramjeet, who planned to walk all the way to Gorakhpur near the Nepal border.

“Maybe when Modiji decided to do this, nobody told him about us. Maybe he doesn’t know about us”, he said.

State governments in India (as in the US) have showed more heart and understanding in the crisis. Trade unions, private citizens and other collectives are distributing food and emergency rations.

The central government has been slow to respond to their desperate appeals for funds. It turns out that the prime minister’s National Relief Fund has no ready cash available. Instead, money from well-wishers is pouring into the somewhat mysterious new PM-CARES fund. Pre-packaged meals with Modi’s face on them have begun to appear.

In addition to this, the prime minister has shared his yoga nidra videos, in which a morphed, animated Modi with a dream body demonstrates yoga asanas to help people deal with the stress of self-isolation.

The narcissism is deeply troubling. Perhaps one of the asanas could be a request-asana in which Modi requests the French prime minister to allow us to renege on the very troublesome Rafale fighter jet deal and use that €7.8bn for desperately needed emergency measures to support a few million hungry people. Surely the French will understand.

On the outskirts of New Delhi on March 29, a woman pushes her daughter on to an overcrowded bus as they attempt the journey back to their home village © Reuters

As the lockdown enters its second week, supply chains have broken, medicines and essential supplies are running low. Thousands of truck drivers are still marooned on the highways, with little food and water. Standing crops, ready to be harvested, are slowly rotting.

The economic crisis is here. The political crisis is ongoing. The mainstream media has incorporated the Covid story into its 24/7 toxic anti-Muslim campaign. An organisation called the Tablighi Jamaat, which held a meeting in Delhi before the lockdown was announced, has turned out to be a “super spreader”.

That is being used to stigmatise and demonise Muslims. The overall tone suggests that Muslims invented the virus and have deliberately spread it as a form of jihad.

The Covid crisis is still to come. Or not. We don’t know. If and when it does, we can be sure it will be dealt with, with all the prevailing prejudices of religion, caste and class completely in place.

Today (April 2) in India, there are almost 2,000 confirmed cases and 58 deaths. These are surely unreliable numbers, based on woefully few tests. Expert opinion varies wildly. Some predict millions of cases. Others think the toll will be far less. We may never know the real contours of the crisis, even when it hits us. All we know is that the run on hospitals has not yet begun.

India’s public hospitals and clinics — which are unable to cope with the almost 1m children who die of diarrhoea, malnutrition and other health issues every year, with the hundreds of thousands of tuberculosis patients (a quarter of the world’s cases), with a vast anaemic and malnourished population vulnerable to any number of minor illnesses that prove fatal for them — will not be able to cope with a crisis that is like what Europe and the US are dealing with now.

All healthcare is more or less on hold as hospitals have been turned over to the service of the virus. The trauma centre of the legendary All India Institute of Medical Sciences in Delhi is closed, the hundreds of cancer patients known as cancer refugees who live on the roads outside that huge hospital driven away like cattle. 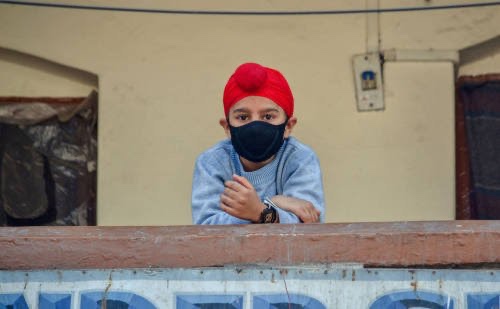 A boy wearing a protective mask ventures on to a balcony in Srinagar, which recorded Kashmir’s first coronavirus death in late March © eyevine

People will fall sick and die at home. We may never know their stories. They may not even become statistics. We can only hope that the studies that say the virus likes cold weather are correct (though other researchers have cast doubt on this). Never have a people longed so irrationally and so much for a burning, punishing Indian summer.

What is this thing that has happened to us? It’s a virus, yes. In and of itself it holds no moral brief. But it is definitely more than a virus. Some believe it’s God’s way of bringing us to our senses. Others that it’s a Chinese conspiracy to take over the world.

Whatever it is, coronavirus has made the mighty kneel and brought the world to a halt like nothing else could. Our minds are still racing back and forth, longing for a return to “normality”, trying to stitch our future to our past and refusing to acknowledge the rupture. But the rupture exists. And in the midst of this terrible despair, it offers us a chance to rethink the doomsday machine we have built for ourselves. Nothing could be worse than a return to normality.

Historically, pandemics have forced humans to break with the past and imagine their world anew. This one is no different. It is a portal, a gateway between one world and the next.

We can choose to walk through it, dragging the carcasses of our prejudice and hatred, our avarice, our data banks and dead ideas, our dead rivers and smoky skies behind us. Or we can walk through lightly, with little luggage, ready to imagine another world. And ready to fight for it.ft.com