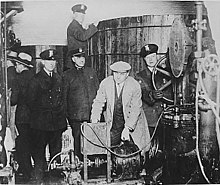 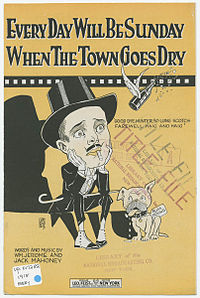 Prohibition in the United States was a nationwide constitutional ban on the production, importation, transportation, and sale of alcoholic beverages that remained in place from 1920 to 1933. During the 19th century, alcoholism, family violence, and saloon-based political corruption prompted activists, led by pietistic Protestants, to end the alcoholic beverage trade to cure the ill society and weaken the political opposition. One result was that many communities in the late 19th and early 20th centuries introduced alcohol prohibition, with the subsequent enforcement in law becoming a hotly debated issue. Prohibition supporters, called drys, presented it as a victory for public morals and health.

Promoted by the “dry” crusaders, the movement was led by pietistic Protestants and social Progressives in the Prohibition, Democratic, and Republican parties. It gained a national grass roots base through the Woman’s Christian Temperance Union. After 1900 it was coordinated by the Anti-Saloon League. Opposition from the beer industry, mobilized “wet” supporters from the Catholic and German Lutheran communities. They had funding to fight back but by 1917–18 the German community had been marginalized by the nation’s war against Germany, and the brewing industry was shut down in state after state by the legislatures and finally nationwide under the Eighteenth Amendment to the United States Constitution in 1920. Enabling legislation, known as the Volstead Act, set down the rules for enforcing the federal ban and defined the types of alcoholic beverages that were prohibited. For example, religious use of wine was allowed. Private ownership and consumption of alcohol were not made illegal under federal law, but local laws were stricter in many areas, with some states banning possession outright.

In the 1920s the laws were widely disregarded, and tax revenues were lost. Very well organized criminal gangs took control of the beer and liquor supply for many cities, unleashing a crime wave that shocked the nation. By the late 1920s a new opposition mobilized nationwide. Wets attacked prohibition as causing crime, lowering local revenues, and imposing rural Protestant religious values on urban America.[1]Prohibition ended with the ratification of the Twenty-first Amendment, which repealed the Eighteenth Amendment on December 5, 1933. Some states continued statewide prohibition, marking one of the last stages of the Progressive Era.

Although popular opinion believes that Prohibition failed, it succeeded in cutting overall alcohol consumption in half during the 1920s, and consumption remained below pre-Prohibition levels until the 1940s, suggesting that Prohibition did socialize a significant proportion of the population in temperate habits, at least temporarily. Some researchers contend that its political failure is attributable more to a changing historical context than to characteristics of the law itself. Criticism remains that Prohibition led to unintended consequences such as the growth of urban crime organizations and a century of Prohibition-influenced legislation. As an experiment it lost supporters every year, and lost tax revenue that governments needed when the Great Depression began in 1929.

The Drunkard’s Progress: A lithograph by&nbspNathaniel Currier supporting the temperance movement, January 1846 Consumption of alcoholic beverages has been a contentious topic in America since the colonial period. In May 1657, the General Court of Massachusettsmade the sale of strong liquor “whether known by the name of rum, whisky, wine, brandy, etc.” to the Indians illegal.[15][dubious ]
In general, informal social controls in the home and community helped maintain the expectation that the abuse of alcohol was unacceptable. “Drunkenness was condemned and punished, but only as an abuse of a God-given gift. Drink itself was not looked upon as culpable, any more than food deserved blame for the sin of gluttony. Excess was a personal indiscretion.”[16]When informal controls failed, there were legal options.

Shortly after the United States obtained independence, the Whiskey Rebelliontook place in western Pennsylvania in protest of government-imposed taxes on whiskey. Although the taxes were primarily levied to help pay down the newly formed national debt, it also received support from some social reformers, who hoped a “sin tax” would raise public awareness about the harmful effects of alcohol.[17] The whiskey tax was repealed after Thomas Jefferson‘s Democratic-Republican Party, which opposed the Federalist Party of Alexander Hamilton, came to power in 1800.[18]

Benjamin Rush, one of the foremost physicians of the late eighteenth century, believed in moderation rather than prohibition. In his treatise, “The Inquiry into the Effects of Ardent Spirits upon the Human Body and Mind” (1784), Rush argued that the excessive use of alcohol was injurious to physical and psychological health, labeling drunkenness as a disease.Apparently influenced by Rush’s widely discussed belief, about 200 farmers in a Connecticut community formed a temperance association in 1789. Similar associations were formed in Virginia in 1800 and New York in 1808.[20] Within a decade, other temperance groups had formed in eight states, some of them being statewide organizations. The words of Rush and other early temperance reformers served to dichotomize the use of alcohol for men and women. While men enjoyed drinking and often considered it vital to their health, women who began to embrace the ideology of “true motherhood” refrained from consumption of alcohol. Middle-class women, who were considered the moral authorities of their households, consequently rejected the drinking of alcohol, which they believed to be a threat to the home.[20] In 1830, on average, Americans consumed 1.7 bottles of hard liquor per week, three times the amount consumed in 2010. 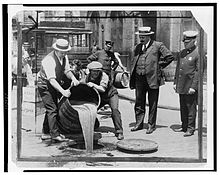