However violence regularly broke out at their marches, notably at a People’s Democracy march from Belfast to Derry which was attacked by loyalists. This led to increasingly bitter rioting between the Catholic population, especially in Derry, and the RUC. The unrest culminated in a series of severe riots across Northern Ireland in August 12-17, 1969 in which 8 people were killed, hundreds of homes destroyed and 1,800 people displaced.

Civil rights agitation from 1968 brought a violent response from the state and loyalists, culminating in severe rioting in August 1969

The rioting began over a loyal order march in Derry, after which rioting between police and Catholics – known as the ‘Battle of the Bogside’ – engulfed Catholic neighbourhoods. In Belfast, the rioting developed into street fighting between Catholics and Protestants during which an entire Catholic street – Bombay Street – was burned out. The RUC also fired heavy machine gun rounds at the mainly Catholic Divis Towers flat complex killing a young boy. The British Army was deployed to restore order and was initially welcomed by Catholics. 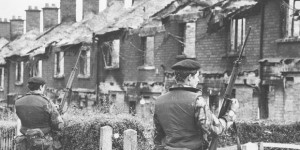 British soldiers look on at burned out houses in Belfast in the August 1969.

The riots marked a watershed. The IRA split into two factions, with the more militant, the Provisionals, claiming the existing organisation had failed to defend Catholics during the rioting. They were determined to launch a new armed campaign against Northern Ireland.

The other faction, known as the Officials favoured building a left wing political party and fostering unity among the Catholic and Protestant working class before attempting to achieve a united Ireland. However it was the Provisionals who would go on to dominate. More moderate nationalists coalesced in 1970 as the Social Democratic and Labour Party (SDLP) which was opposed to violence.

British troops were initially welcomed by Catholics as their protectors but were rapidly drawn into a counter-insurgency campaign against Republican paramilitaries.

The British Army’s relationship with the nationalist population quickly soured as a result of its efforts to disarm republican paramilitaries – notably the Falls Curfew of July 1970 in which it cordoned off the Lower Falls area of Belfast, engaging in several hours of gun battles with the Official IRA, killing four civilians and clouding the area in tear gas.

By 1971 both IRA factions were targeting the British Army. In response the Northern Ireland government introduced internment without trial – imprisoning 2,000 people between 1971 and 1975, over 90% of whom were republicans and less than 10% loyalists. In the initial sweep no loyalists at all were detained. Even those opposed to violence, such as the SDLP, walked out of the Stormont Parliament and led their supporters in a rent and rates strike. As a result, many republicans would depict the armed campaign of the following 25 years and defensive and retaliatory. 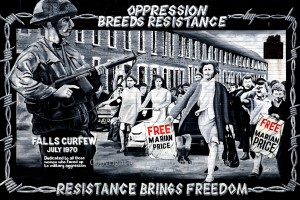 A republican mural depicts the Falls Curfew. (Courtesy of the Extramural Activities website).

However it was also true that the Provisionals especially were determined from the outset to wage ‘armed struggle’ which they viewed as being the continuation of the Irish War of Independence. Unlike previous IRA campaigns internment was not introduced in the Republic of Ireland, leading unionists to allege that the southern state sympathised with republican paramilitaries.

The London government tried to defuse nationalist militancy with a series of reforms of Northern Ireland. The B Specials (auxiliary police in theory but in practice a unionist militia) were disbanded, electoral boundaries were withdrawn to reflect Catholic numbers and housing and employment executives were set up to deal with discrimination.

Republicans and state forces were not the only source of violence. Loyalist groups also proliferated in the early 1970s with many Protestant neighbourhoods setting up paramilitary and vigilante groups. The largest of these was the Ulster Defence Association (or UDA, also referred to as Ulster Freedom Fighters or UFF) and the Ulster Volunteer Force (or UVF) founded in 1966. By 1972 both of these groups and others were killing significant numbers of Catholic civilians. Despite this, far fewer loyalist than republican militants were imprisoned. 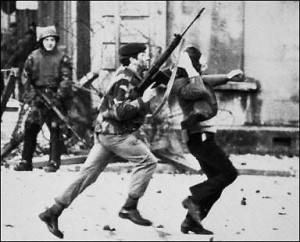 British troops in action in Derry in January 1972

By far the worst year of the ‘Troubles’ was 1972, when 480 people lost their lives. The year opened with ‘Bloody Sunday’ in Derry in which 14 marchers against internment were shot dead by the British Army on January 30. This massacre gave massive impetus to militant republicans.

The Provisional IRA especially upped their campaign to its greatest intensity, killing over 100 British soldiers in that year and devastating the centre of Belfast and Derry with car bomb attacks – notably on ‘Bloody Friday’ on 21 July when 9 people were killed and 130 injured by 26 near-simultaneous car bombs.

The Provisional IRA went on the offensive in 1971-72, sparking off the most lethal phase of the conflict (1972-1976)  and causing London to suspend the government of Northern Ireland.

The British Army characterised this period as the ‘insurgency phase’ of the conflict [1]. In addition to Bloody Sunday, its treatment of the nationalist population was often very violent – killing 170 people, many of them civilians, from 1971 to 1974. There were other incidents of large scale shooting of civilians such as the Ballymurphy shootings(11 dead in 1971) and the Springhill shootings (5 deaths in 1972).

It has recently emerged also that an undercover unit, the MRF, was carrying out assassinations and random shootings in Catholic areas and was responsible for at least 10 deaths, so some deaths attributed to paramilitary violence may actually have been undercover soldiers.

The Provisionals believed they were on the verge of victory by the summer of 1972, or at any rate British withdrawal, when the British government opened direct talks with the IRA leadership. In response the IRA called a brief ceasefire. However no political agreement was reached – the IRA proposed no terms other than a united Ireland – and, after a standoff with the British Army and loyalists in the Lenadoon area of Belfast flared up into violence, the ceasefire was called off. 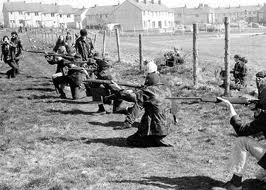 Concurrently loyalist killings also spiralled. Their actions included pub bombings such as the McGurk pub bombing in 1971 in which 15 were killed and the abduction and shooting of random Catholics.

Yet another source of violence was spasmodic feuding between the rival republican factions. However the Official IRA called a ceasefire in May 1972, leaving the title of the IRA mainly to the Provisionals. Militant Official IRA members split off to form the Irish National Liberation Army, INLA, in 1974.

In the midst of this descent into violence the British government suspended the Northern Ireland Parliament and reintroduced ‘Direct Rule’ from London in March 1972. 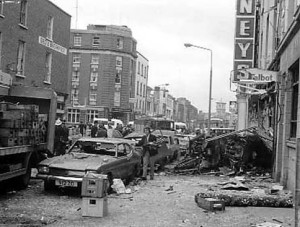 The aftermath of a loyalist bomb in Dublin 1974.

The IRA began to back away from large scale armed encounters with British forces after their ‘no go’ zones of Belfast and Derry were taken by the British Army in a large operation known as Operation Motorman in July 1972.

The British military later characterised the ongoing IRA campaign as a move from ‘insurgency’ to ‘terrorism’, meaning that their actions henceforth were typically smaller scale and clandestine. They also took to bombing British cities.

The loyalist paramilitaries also became increasingly indiscriminate in the period 1974-1976 in which they killed over 370 Catholic civilians. Republican groups killed 88 Protestants civilians in the same period. Loyalists also began bombing towns and cities south of the border, notably in the Dublin and Monaghan bombs of May 1974, in which 33 people were killed.

State forces were also a major source of violence in the early 1970s as were loyalist paramilitaries.

There have been persistent allegations of ‘collusion’ of state forces in the loyalist campaign – RUC and Ulster Defence Regiment personnel certainly passed arms and information to loyalists and allegations exist that British Army intelligence was also involved in planning loyalist attacks. The Stevens Enquiry report of 2003 stated that it had found evidence of high level collusion between state forces including police, army and intelligence and loyalist groups.

The sectarian dimension of the conflict was brought under some control in 1976 with an agreement between republican and loyalist paramilitaries to cease using car bombs and targeting ‘enemy’ civilians (as reported by Eamon Mallie, Patrick Bishop, The Provisional IRA p 340).

From January 1975 to January 1976 the IRA was persuaded by the British government to call another ceasefire. However no political progress ensued and this had little appreciable effect on the level of political violence as republicans still killed 125 peopleand simply meant that IRA attacks were usually claimed with adopted names. theirIrishhistory.com