Las Vegas Police Say They Pursued ‘More Than A 1,000 Leads, But Still No Clear Motive’. Newsweek.com

The FBI has closed its investigation of the Las Vegas mass shooting that killed 58 people and injured hundreds more.. 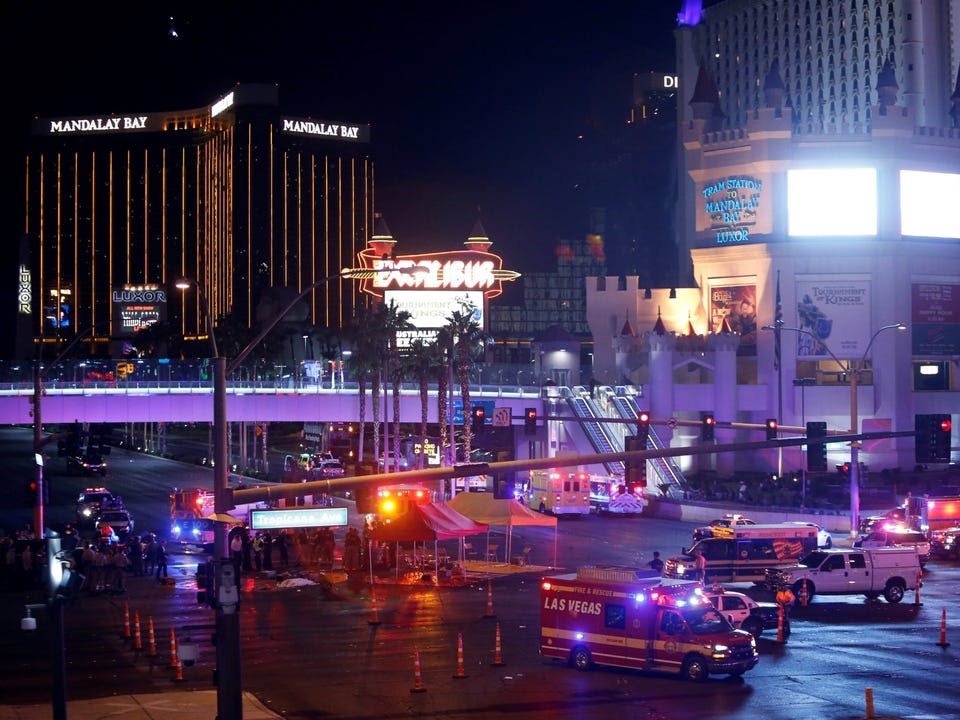 Emergency services set up a makeshift medical centre in the middle of the Las Vegas Strip.Reuters

The FBI has concluded its investigation of the Las Vegas mass shooting, the deadliest of its kind in modern US history.

An FBI Behavioral Analysis Unit did not find a “single or clear motivating factor” for gunman Stephen Paddock’s actions, but concluded he was in financial trouble and had difficulty coping with his age.

But before the agency announced its findings on Tuesday, the massacre unfolded as most of them do — in a storm of chaos and confusion.

58 people were killed and more than 850 injured when a gunman opened fire at a country music festival on the Las Vegas Strip on October 1, 2017.

By the time the general public knew a shooting was underway, the gunman, 64-year-old Stephen Paddock, was already dead.

Despite an extensive investigation lasting well over a year, authorities ended their efforts without being able to determine Paddock’s specific motive.

Here, moment by moment, is how the attack unfolded:

September 25, 2017: Stephen Paddock checks into the Mandalay Bay Resort and Casino on the south end of the Las Vegas Strip. 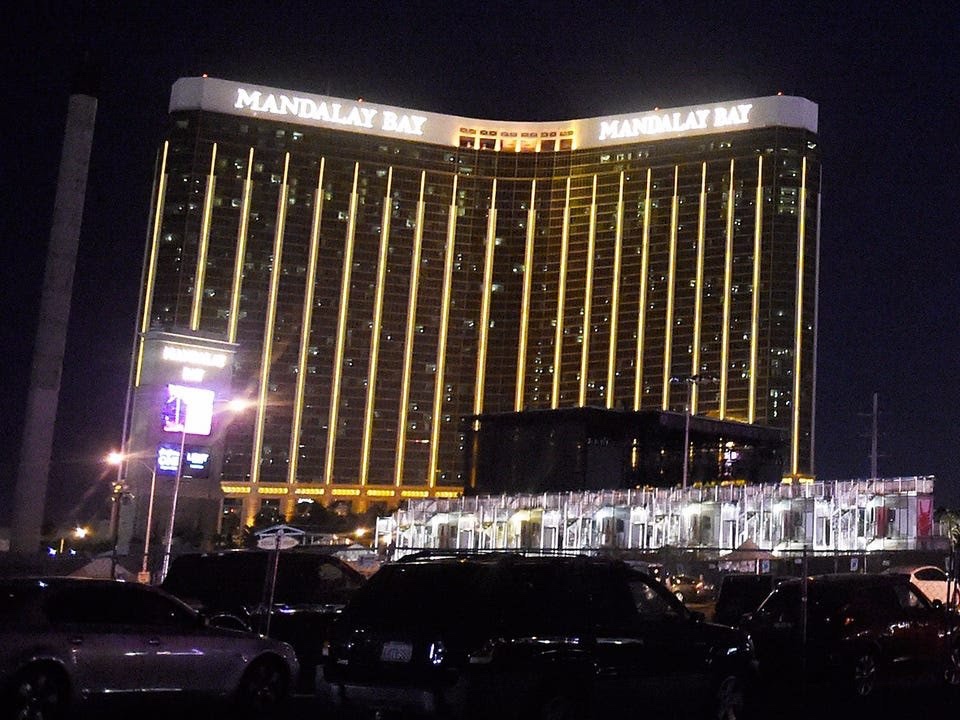 The Mandalay Bay Resort and Casino in Las Vegas, shortly after the shooting. Getty Images.

Paddock first arrived at the Mandalay Bay almost a whole week before the shooting.

Police originally said he checked in on Thursday September 28, but later updated the date to Monday 25, three days before.

According to the Associated Press, he asked for a high-level suite overlooking the Route 91 Harvest festival  — but couldn’t immediately get one.

A hotel source said that he didn’t move in to the 32nd-floor room he used for the shooting until Saturday, the night before the attack.

The AP said he “was given the room for free because he was a good customer.”

Paddock transports huge quantities of weapons and ammunition into his room. 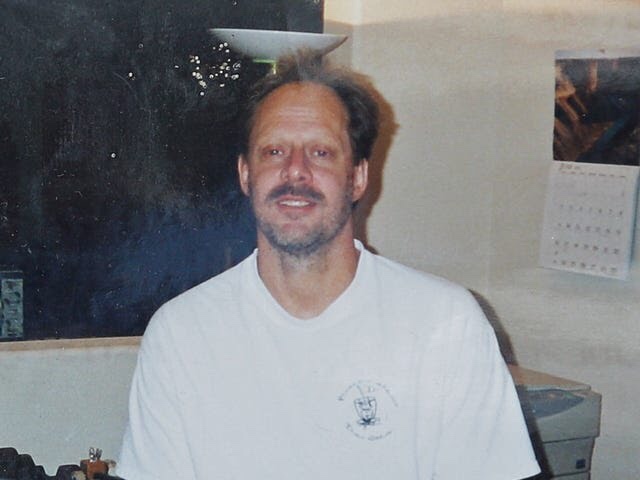 And old photograph of Stephen Paddock, provided to the media by his brother. AP

The Las Vegas Metropolitan Police Department (LVMPD) say they found 23 guns and thousands of rounds of ammunition in his room.

He appears to have planned meticulously for the attack. As well as a large number of guns, Paddock set up at least three cameras to monitor the corridor outside, police said

According to Fox News, the country star Jason Aldean went onstage at 9:40 p.m. on the night of the shooting. He played for half an hour before the shooting began.

Las Vegas radio station 95.5 The Bull shared the line-up on Twitter before the event.

Aldean escaped unharmed and later paid tribute to his fans who were hurt and killed.

The shooting began with a hail of bullets on the crowd below, fired from Paddock’s hotel room.

Using multiple rifles, Paddock opened fired on the crowd of 22,000 people below him, from a distance where he would have had no ability to distinguish individual targets.

Officers started to exchange radio messages about the shooting.

Las Vegas police say that Paddock fired “a dozen or so volleys” overall during the shooting.

Watch footage from the scene here.

(NB: Earlier versions of the police timeline said the shooting began at 9:59 p.m. They have been revised.)

10:06 p.m.: Paddock shoots a security guard inside the Mandalay Bay.

Very soon after, Paddock turned his fire inside the building, and hit, but an employee just outside his hotel door.

In its final report into the shooting, the LVMPD said that security guard Jesus Campos was shot in the leg at 10.06 p.m. on the 32nd floor of the Mandalay Bay.

Campos was investigating an open door — not the door to Paddock’s room — when he was hit in the leg. He alerted hotel security and stayed on the floor until police arrived.

The first police to respond were officers who happened to be inside the Mandalay Bay for an event.

Seven minutes after the first shooting, they had made their way to the 31st floor, according to an official police timeline, and knew the shooter was one floor above them.

10:13 p.m.: Police outside realise where the shots are coming from. 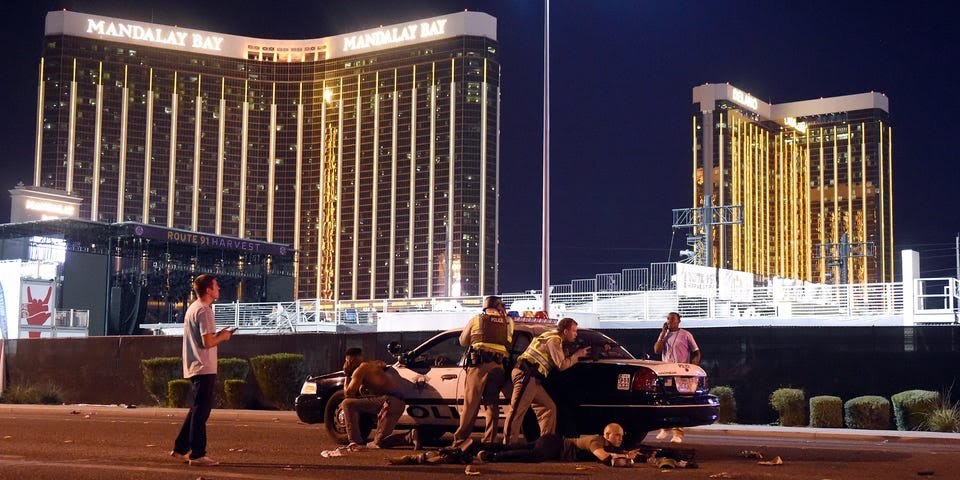 Police officers taking cover behind a patrol car that was in the line of fire from Stephen Paddock’s 32nd-floor room in Mandalay Bay. Getty Images

Citing police radio transmissions, The New York Times said officers around Route 91 Harvest were still working out what was happening while colleagues inside the hotel were closing in.

“It’s coming from like the 50th or 60th floor, north of the Mandalay Bay! It’s coming out a window.

“We’re seeing local flashes in the middle of Mandalay Bay on the north side, kind of on the west tower but towards the center of the casino, like one of the middle floors.” 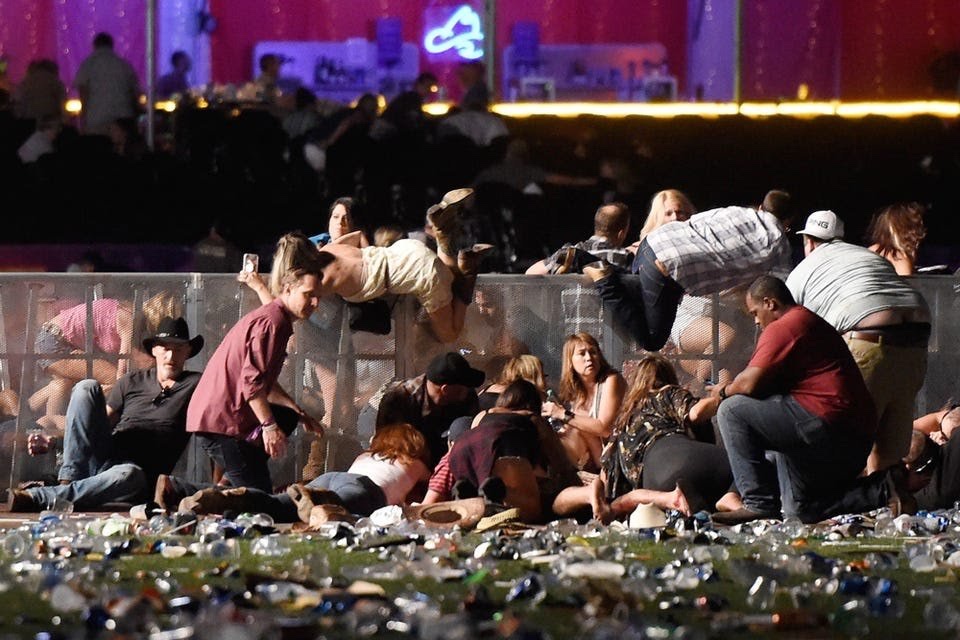 One of the earliest records of the shooting is a tweet from the user @GLOKMIN.

“i’m pretty sure a terrorist attack just happened next to me im at mandalay bay,” they wrote.

The LVMPD timeline says that two of its officers were on the 32nd floor by 10:17 p.m., 12 minutes after the attack began. They found Campos, the wounded security guard, who told them which room is Paddock’s.

They were soon joined by eight more officers, and spent some of the following 15 minutes systematically searching the floor’s other rooms and evacuating guests.

It would be almost another hour, however, until officers would break into Paddock’s room.

10:25 p.m.: The police issue an active-shooter alert locally. They thought there could be as many as 3 gunmen. 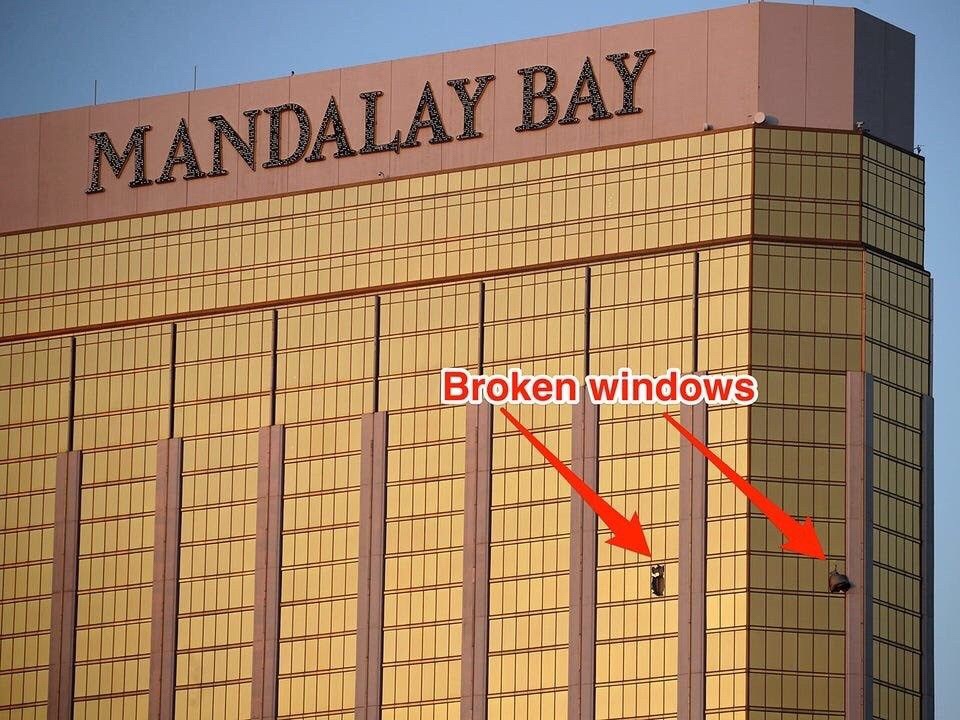 Broken windows, pictured the morning after the shooting, show the location of Paddock’s suite on the exterior of Mandalay Bay. AP/Business Insider

Taxi drivers in the area received a message direct from the police at 10:25 p.m. telling them to avoid the Mandalay Bay area.

Reuters reported that minutes after the alert to cab drivers, the police started herding people inside Mandalay Bay to get them out of the line of sight of the gunman.

Almost 40 minutes after the attack began, the Las Vegas Metropolitan Police Department wrote on Twitter that it was investigating an ongoing shooting.

According to Newsweek officers asked permission to enter Paddock’s room sooner but were told to wait for SWAT teams.

He said officers were right to wait because Paddock was “contained” and had stopped firing out of the window.

He said: “The floor had been evacuated of any guests, the suspect was contained and isolated within a room.” 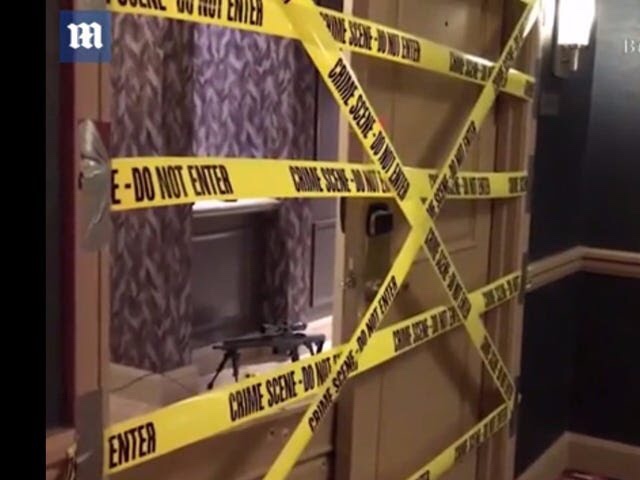 Footage published by the Daily Mail news site showing the inside of Stephen Paddock’s Mandalay Bay suite after the shooting was over. Daily Mail

One hour and five minutes after the first shots were fired, a police SWAT unit detonated an explosive device to break down Paddock’s door, according to the police timeline.

By this time Paddock had already killed himself.

“The Strike Team reported Paddock was down from an apparent self-inflicted gunshot wound to the head,” the final report said.

11:20 p.m.: Officers break down a second door and declare the scene safe.

SWAT officers noticed a second, closed, door when they burst into Paddock’s suite, and could not immediately be sure what was behind it.

They used a second explosive charge to burst it open, at which point they could see the entire suite and were certain that Paddock had been alone.

Two minutes before midnight, and almost two hours after the first shots were fired, the Las Vegas police tweeted confirmation that “one suspect is down”.

Two minutes before midnight, and almost two hours after the first shots were fired, the Las Vegas police tweeted confirmation that “one suspect is down”. 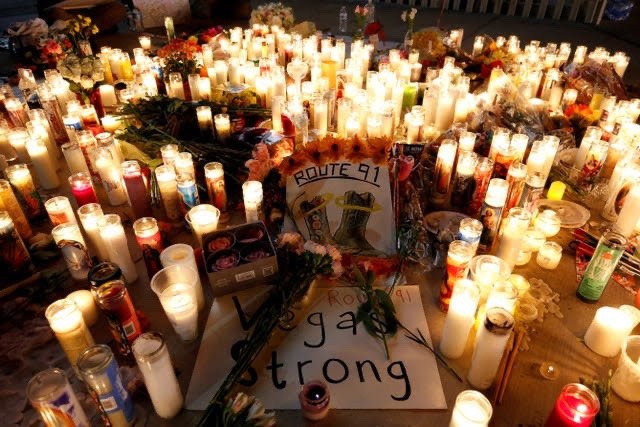 A candle-lit tribute in Las Vegas to the victims of the shooting. Reuters

It was not until 31 minutes past midnight — more than an hour since Paddock was found dead — that the police department sent a follow-up tweet saying it thought the dead man was the only attacker.

Two hours, 26 minutes after it began, the massacre was officially over.

The final death toll was 58. More than 800 people were injured.

August 3, 2018: Police release their final report on their investigation. 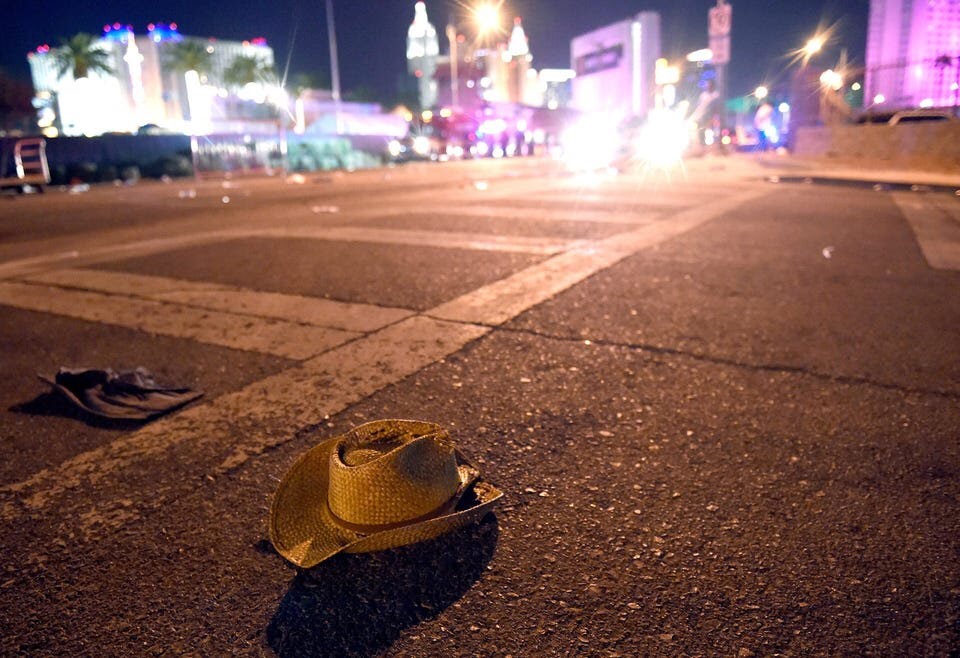 Police concluded their investigation ten months after the shooting, and said they could not determine the motivation behind it.

Paddock did not leave a suicide note, the investigation concluded. There was no evidence he belonged to any terrorist organizations or hate groups, and he did not have a criminal record.

Police determined that he acted alone.

January 29, 2019: The FBI releases its own findings after a lengthy investigation

The FBI released its own findings about the shooting after a lengthy investigation.

An FBI Behavioral Analysis Unit did not find a “single or clear motivating factor” for Stephen Paddock’s actions, but concluded he was in financial trouble and had difficulty coping with his age.

The agency determined he acted alone in the shooting and was “neither directed, inspired, nor enabled by ideologically-motivated persons or groups.”

The report also said Paddock had a “desire to die by suicide” and “a desire to attain a certain degree of infamy” through a “mass casualty attack.” Source: FBI/Business insider.com