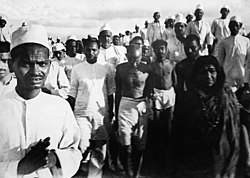 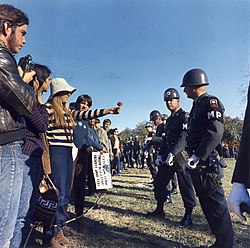 A demonstrator offers a flower to military police at a National Mobilization Committee to End the War in Vietnam-sponsored protest in Arlington, Virginia, on October 21, 1967 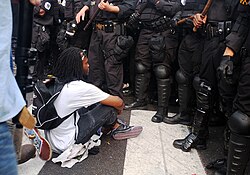 Nonviolent resistance (NVR or nonviolent action) is the practice of achieving goals such as social change through symbolic protests, civil disobedience, economic or political noncooperation, satyagraha, or other methods, while being nonviolent.

This type of action highlights the desires of an individual or group that feels that something needs to change to improve the current condition of the resisting person or group.

Since acts of nonviolent political resistance need not satisfy any of these criteria, Lang argues that the two categories of action cannot be identified with one another.

Furthermore, civil disobedience is a form of political action which necessarily aims at reform, rather than revolution: its efforts are typically directed at the disputing of particular laws or group of laws, while conceding the authority of the government responsible for them.

Research shows that non-violent campaigns diffuse spatially. Information on non-violent resistance in one country could significantly affect non-violent activism in other countries. Current nonviolent resistance includes the Jeans Revolution in Belarus, the Black Lives Mattermovement in the United States initially and now internationally, the fight of the Cuban dissidents, and internationally the Extinction Rebellion and School strike for climate. Many movements which promote philosophies of nonviolence or pacifism have pragmatically adopted the methods of nonviolent action as an effective way to achieve social or politicalgoals.

A great deal of work has addressed the factors that lead to violent mobilization, but less attention has been paid to understanding why disputes become violent or nonviolent, comparing these two as strategic choices relative to conventional politics. Wiki

America On Coffee is a blogging network dedicated to the preservation of the U.S.A.'s culture, heritage and traditions.The simple things of life are what we share best.Great coffee, wholesome people, make it all the better. AmericaOnCoffee (AOC) authors its 'owned', shared works.  Shares that are not noted as owned by (AOC),  DO NOT belong to (AOC) BUT belong to their own rightful owners. A continuous special thanks to our anonymous sponsors and to our contributors. View all posts by Americaoncoffee