On January 12, 2018, the California Board of Parole Hearings granted parole to an elderly inmate named John Clutchette. However, supporters of parole for Clutchette are concerned that California Governor Jerry Brown will reverse the Board’s decision, and Clutchette will not be released.

Supporters have a reason to be concerned. After all, this is exactly what happened in 2016 when Clutchette was similarly granted parole by the Board but Governor Brown chose to reverse the Board’s ruling.

Legal scholar Angela A. Allen-Bell, a professor at Southern University Law Center and students in her “Law and Minorities” class began researching Clutchette’s legal battle over a year ago. Following extensive research they have concluded that “the law has been used to perpetuate an injustice in Mr. Clutchette’s case.”

Why did Governor Brown deny parole to 74-year-old John Clutchette? In our interview with Professor Bell, she refers to Brown’s written explanation for his 2016 parole reversal, where Brown cites the fact that in the early 1970s, Clutchette was one of a trio of inmates at California’s Soledad Prison, who became high profile co-defendants known as the “Soledad Brothers.” 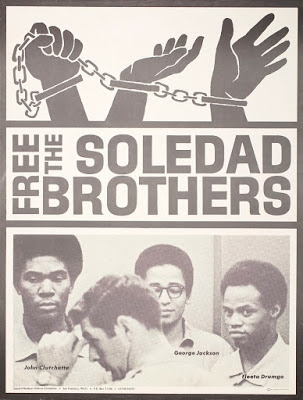 Since 1960, Jackson had been serving an indeterminate prison sentence of one year to life for armed robbery. He contended that the denial of parole stemmed from his politics. Had he been convicted of murdering the prison guard, he would have faced a mandatory death penalty.

The Brothers—Jackson, 29 years old; John W. Cluchette, 28, and Fleeta Drumgo, 26—drew greater publicity with the publication last year of Jackson’s prison letters under the title, “Soledad Brother.” Reviewers found the statements of Mr. Jackson, who had originally been imprisoned for armed robbery, to constitute an articulate and powerful revolutionary manifesto.

Jackson was also linked to Angela Davis, the avowed California Communist who has been charged with playing a role in the violent attempt to free Jackson and his two codefendants in a bizzare courtroom episode in Marin County in August, 1970.

In that incident, Jackson’s 16‐year‐old brother, Jonathan, invaded a courtroom and took several hostages, including a “judge“, demanding the release of the Soledad prisoners. A shootout ensued, resulting in the death of four prisoners, including a judge and young Jackson. 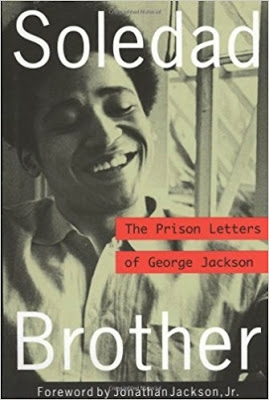 Miss Davis, a former philosophy
instructor at the University of California at Los Angeles, was later accused in a grand jury indictment of buying all the guns used by the kidnappers. Recently, she was granted the right to confer three times with the Soledad Brothers, which her lawyers had argued would be “essential, to her defense.”

The trials of both Miss Davis and the Soledad Brothers have become sources of enormous controversy, with heavy racial undertones. In both cases, the defendants are maintaining that the trials are illegitimate and acts of political repression by the Government.

Both trials, as well, have been surrounded by the fear of more violence. The courtroom in San Rafael, Calif., where Miss Davis is being tried, has been cleared at least twice because of bomb scares. And in San Francisco, where the trial, of the Soledad Brothers has been struggling to get under way, a bulletproof glass and steel barrier was erected to separate spectators from the well of the court.

Attorneys for the three Soledad Brothers argued for the removal of the barrier. They have exercised their single peremptory challenge to Judge Walter J. Carpenti on the ground that he was racially prejudiced. The trial had been put over for two weeks until a new judge was found.

Miss Davis is being tried along with Ruchell Magee, 32 years old, who was in the Marin County courtroom at the time of the shootout last year. He is also accused of murdering one of the hostages, Superior Court Judge Harold Haley. Magee was named by a San Quentin official yesterday as having been involved in the attempted escape.

In January, 1970, a fight broke out in a prison yard at the Soledad Correctional Training Facility, a state prison in California’s lush Salinas Valley. Trying to quell the disturbance, a white guard shot and killed three inmates, all black.

The incident began a chain of events that eventually led to two trials that have become causes cell bres for black militants, white radicals and some liberals, who have protested the prosecution of the wellknown activists, George L. Jackson, the “Soledad Brothers” and Angela Davis.

Two days after the original Soledad incident, a Monterey County grand jury ruled that the deaths of the three inmates were “justifiable homicide.” Hours after news of the decision reached the prison, a white guard was murdered. George Jackson was one of three black prisoners — the “Soledad Brothers” — charged with the crime.

Throughout the series of widely publicized incidents that led finally to his death yesterday in his attempt to escape from San Quentin Prison, Jackson had served some 11 years in prison. In a recent interview, he said: “I can’t live up to the expectations of prison life. I never will. The whole truth is that I would hope to escape.”

Jackson’s book of letters was praised by many reviewers as a corrosive statement of black rage. “This is one nigger who is positively displeased,” he said of himself in one passage. “I’ll never forgive, I’ll never forget, and if I’m guilty of anything at all it’s of not leaning on them hard enough. War without terms.” article source 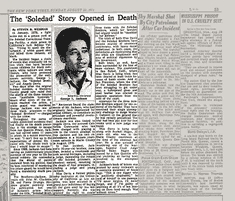