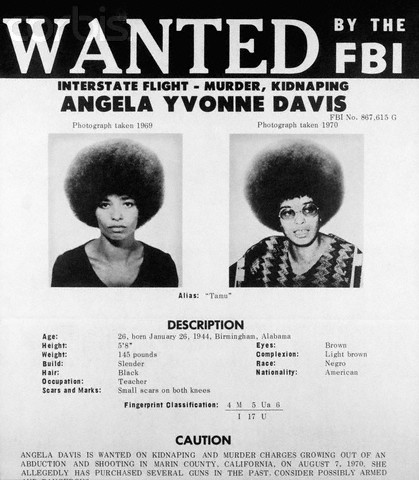 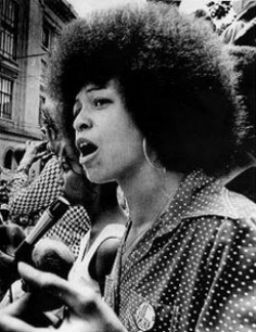 Angela Yvonne Davis (born January 26, 1944) is an American political activist, academic, and author. She emerged as a prominent counterculture activist and radical in the 1960s as a leader of the Communist Party USA, and had close relations with the Black Panther Partythrough her involvement in the Civil Rights Movement.Because she had purchased the firearms used in the crime, Davis was prosecuted for conspiracy involving the 1970 armed take-over of a Marin County, California, courtroom, in which four persons were killed. She was acquitted.
She was a professor (now retired) at the University of California, Santa Cruz, in its History of Consciousness Department and a former director of the university’s Feminist Studies department.[5] Her research interests are feminism, African-American studies, critical theory, Marxism, popular music, social consciousness, and the philosophy and history of punishment and prisons. She co-founded Critical Resistance, an organization working to abolish the prison-industrial complex.

Davis’s membership in the CPUSA led California Governor Ronald Reagan in 1969 to attempt to have her barred from teaching at any university in the State of California. She supported the governments of the Soviet Bloc for several decades. During the 1980s, she was twice a candidate for Vice President on the CPUSA ticket, but in 1991 left the party.[6]Angela Davis was born in Birmingham, Alabama. Her family lived in the “Dynamite Hill” neighborhood, which was marked in the 1950s by the bombings of houses of middle-class blacks who had moved into the area, in an attempt to intimidate them and drive them out. Davis occasionally spent time on her uncle’s farm and with friends in New York City.[7] Her family included brothers Ben and Reginald and sister Fania. Ben played defensive back for the Cleveland Browns and Detroit Lions in the late 1960s and early 1970s.[8]

Davis attended Carrie A. Tuggle School, a segregated black elementary school; later she attended Parker Annex, a middle-school branch of Parker High School in Birmingham. During this time Davis’ mother, Sallye Bell Davis, was a national officer and leading organizer of the Southern Negro Youth Congress, an organization influenced by the Communist Party. It was trying to build alliances among African Americans in the South. Consequently, Davis grew up surrounded by communist organizers and thinkers who significantly influenced her intellectual development.

Davis was involved in her church as a child; she was an active member in her church youth group and attended Sunday school regularly. Davis attributes much of her political involvement to her involvement as a young girl in Birmingham with the Girl Scouts of the United States of America. She earned many badges and certificates; she also participated in Girl Scouts 1959 national roundup in Colorado. As a Girl Scout she marched and picketed to protest racial segregation in Birmingham.[10]

By her junior year in high school, Davis had applied to and was accepted at an American Friends Service Committee(Quaker) program that placed black students from the South in integrated schools in the North. She chose Elisabeth Irwin High School in Greenwich Village. There she was introduced to socialism and communism, and recruited by a Communist youth group, Advance.[11]Davis was awarded a scholarship to Brandeis University in Waltham, Massachusetts, where she was one of three black students in her freshman class. She initially felt alienated by the isolation of the campus, but she soon made friends with foreign students. She encountered the Frankfurt School philosopher Herbert Marcuse at a rally during the Cuban Missile Crisis and became his student. In a 2007 television interview, she said, “Herbert Marcuse taught me that it was possible to be an academic, an activist, a scholar, and a revolutionary.” She worked part-time to earn enough money to travel to France and Switzerland before she attended the eighth World Festival of Youth and Students in Helsinki, Finland. She returned home in 1963 to a Federal Bureau of Investigation interview about her attendance at the Communist-sponsored festival.

During her second year at Brandeis, Davis decided to major in French and continued her intensive study of philosopher Jean-Paul Sartre. Davis was accepted by the Hamilton College Junior Year in France Program. Classes were initially at Biarritz and later at the Sorbonne. In Paris, she and other students lived with a French family. She was in Biarritz when she learned of the 1963 Birmingham church bombing, committed by members of the Ku Klux Klan, in which four black girls were killed. She grieved deeply as she was personally acquainted with the young victims.