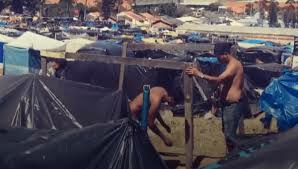 A mural in Sao Paulo by street artist Paulo Ito, created ahead of the 2014 World Cup in Brazil, shows a crying child with only a football to eat. The country’s hunger crisis is growing worse. Photograph: Andre Penner/AP

‘People are getting poorer’: hunger and homelessness as Brazil crisis deepens

Unemployment and social instability threaten unwelcome return to the past in recession-hit country once seen as a model for developing economies.

It wasn’t yet 5am when Miriam Gomes drove up to Happy Little Angel, the social project she runs in the scruffy Cidade Nova neighbourhood of Rio de Janeiro, but the queue for her weekly food handout was already a hundred yards long.

Some had slept outside – those among Rio’s growing army of homeless people, or who lived too far away to get there by 6.30am, when those registered could start collecting a bag of vegetables, fruit, rice, beans, pasta, milk and biscuits, and a little chocolate.

These are some of the victims of a worsening problem in a country once praised for reducing poverty, but where the numbers of poor are climbing again.

Brazil has slumped into its worst recession for decades, with 14 million people unemployed.

“There are a lot more people on the street,” said Gomes, 53, who bought the house where Little Happy Angel is based with an inheritance, and lives off her late father’s military pension.

Some of those Gomes helps benefit from a cash transfer scheme called the family allowance, but still struggle to make ends meet. Others are among the 1.1 million families the government removed from the programme last year for what it called “irregularities”.

Among the latter is Vera dos Santos, 43, who lost her job as a maid two and a half years ago, has three teenage children to feed, and recently had her allowance stopped. “My financial situation is difficult,” she said.

Brazil celebrated its removal from the UN hunger map in 2014. Now it is in danger, a new report warns, of being reinstated.

“If we don’t take the due providences, Brazil will go back to the hunger map,” said Francisco Menezes, an economist and one of the authors of a progress report on the 2030 sustainable development agenda, presented recently to the UN by a group of two dozen non-government groups and research institutes, and released in full later this month.

2 thoughts on “Homelesness In Brazil”