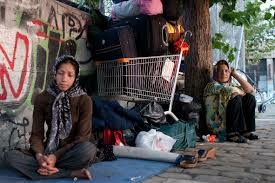 (2014) A handful of homeless people in the Greek capital have been offered paid jobs giving tourists a glimpse into their lives on the back streets and alleys of Athens.

Labros Moustakis, one of the tour guides, had his dreams destroyed by the economic crisis.

The 52-year-old Greek from Brazil lives in the Ionis Hotel which has been converted by the city into a shelter for the homeless.

It’s perhaps ironic given that he used to be a hotel employee before he lost his job in 2011 and could not pay his…
READ MORE: youtube.com http://www.euronews.com/2014/09/22/gr…