The Confederate White House is thought to have been built in 1825 by William Sayre, one of Montgomery’s merchants. Afterward, the house passed into the possession of Col. J. G. Winter who remodeled it and afterward sold it to Col. Edmond Harrison of nearby Prattville, Alabama. In February 1861, shortly after selecting Davis as president, the Provisional Confederate Congress, meeting in Montgomery, authorized the leasing of an executive mansion.

An offer came from Harrison, who offered to rent the house fully furnished and staffed for $5,000 per year. But after the Davises asked for extra furnishings of silver and linen, another $987 were added to the price of the lease. Additional furnishings were brought from the Davises’ own house in Biloxi, Mississippi. During the Davises’ stay at this house, they threw many lavish parties and entertainments.

The first of these was held by Mrs. Davis for ladies of Montgomery. Records of the events say that they were both lavish and also well-managed. On May 27, 1861, they vacated the house and moved to the house in Richmond. When the capital moved from Montgomery to Richmond, the Confederate government sold the lease on the house. After the Civil War the house passed on to William Crawford Gibb and then eventually to the Tyson family in 1871.

L’Enfant secured the lease of quarries at Wigginton Island and along Aquia Creek in Virginia for use in the foundations and outer walls of the Capitol in November 1791. Surveying was under way soon after the Jefferson conference plan for the Capitol was accepted.[21] On September 18, 1793, President George Washington, along with eight other Freemasons dressed in masonic regalia, laid the cornerstone, which was made by silversmith Caleb Bentley.

Construction proceeded with Hallet working under supervision of James Hoban, who was also busy working on construction of the “President’s House” (also later known as the “Executive Mansion”). Despite the wishes of Jefferson and the President, Hallet went ahead anyway and modified Thornton’s design for the East Front and created a square central court that projected from the center, with flanking wings which would house the legislative bodies.

Hallet was dismissed by Secretary Jefferson on November 15, 1794. George Hadfield was hired on October 15, 1795, as Superintendent of Construction, but resigned three years later in May 1798, because of his dissatisfaction with Thornton’s plan and quality of work done thus far. 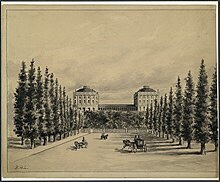 The Senate (north) wing was completed in 1800. The Senate and House shared quarters in the north wing until a temporary wooden pavilion was erected on the future site of the House wing which served for a few years for the Representatives to meet in, until the House of Representatives (south) wing was finally completed in 1811, with a covered wooden temporary walkway connecting the two wings with the Congressional chambers where the future center section with rotunda and dome would eventually be.

However, the House of Representatives moved early into their House wing in 1807. Though the Senate wing building was incomplete, the Capitol held its first session of the United States Congress with both chambers in session on November 17, 1800.

The National Legislature was moved to Washington prematurely, at the urging of President John Adams, in hopes of securing enough Southern votes in the Electoral College to be re-elected for a second term as president.

Early religious use
For several decades, beginning when the federal government moved to Washington in the fall of 1800, the Capitol building was used for Sunday religious services as well as for governmental functions. The first services were conducted in the “hall” of the House in the north wing of the building.

In 1801 the House moved to temporary quarters in the south wing, called the “Oven”, which it vacated in 1804, returning to the north wing for three years. Then, from 1807 to 1857, they were held in the then-House Chamber (now called Statuary Hall). When held in the House chamber, the Speaker’s podium was used as the preacher’s pulpit. According to the U.S. Library of Congress exhibit Religion and the Founding of the American Republic.

America On Coffee is a blogging network dedicated to the preservation of the U.S.A.'s culture, heritage and traditions.The simple things of life are what we share best.Great coffee, wholesome people, make it all the better. AmericaOnCoffee (AOC) authors its 'owned', shared works.  Shares that are not authored by (AOC),  DO NOT belong to (AOC) BUT belong to their own rightful owners. If you are an author, comedian, entertainer or musician interested in receiving a review, contact AmericaOnCoffee, here on-site. You may also tweet us: @americaoncoffey, for any questions or requests you might have. View all posts by Americaoncoffee