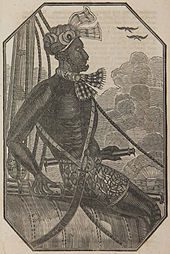 On June 27, 1839, La Amistad(“Friendship”), a Spanish vessel, departed from the port of Havana, Cuba (then a Spanish colony), for the Province of Puerto Principe, also in Cuba. The masters of La Amistad were the ship’s captain Ramón Ferrer, José Ruiz, and Pedro Montez, all Spanish nationals. With Ferrer was his personal slave Antonio. Ruiz was transporting 49 Africans, entrusted to him by the governor-general of Cuba. Montez held four additional Africans, also entrusted to him by the governor-general.

As the voyage normally took only four days, the crew had brought four days’ worth of rations, not anticipating the strong headwind that slowed the schooner. On July 2, 1839, one of the Africans, Cinqué, freed himself and the other captives using a file that had been found and kept by a woman who, like them, had been on the Tecora (the ship that had transported them illegally as slaves from Africa to Cuba).

The Mende Africans killed the ship’s cook, Celestino, who had told them that they were to be killed and eaten by their captors. The slaves also killed Captain Ferrer; the struggle resulted as well in the deaths of two Africans. Two sailors escaped in a lifeboat. The Africans spared the lives of the two masters who could navigate the ship, José Ruiz and Pedro Montez, upon the condition that they would return the ship to Africa. They also spared the captain’s personal slave, Antonio, a creole,[5] and used him as an interpreter with Ruiz and Montez.[6]

The crew deceived the Africans and steered La Amistad north along the coast of the United States, where the ship was sighted repeatedly. They dropped anchor half a mile off eastern Long Island, New York, on August 26, 1839, at Culloden Point. Some of the Africans went ashore to procure water and provisions from the hamlet of Montauk. The vessel was discovered by the United States revenue cutter USS Washington. Lieutenant Thomas R. Gedney, commanding the cutter, saw some of the Africans on shore and, assisted by his officers and crew, took custody of La Amistad and the Africans.[7]

Taking them to the port of New London, Connecticut, he presented officials with a written claim for his property rights under admiralty law for salvage of the vessel, the cargo, and the Africans. Gedney allegedly chose to land in Connecticut because slavery was still technically legal there, unlike in New York. He hoped to profit from sale of the Africans.[8] Gedney transferred the captured Africans into the custody of the United States District Court for the District of Connecticut, at which time legal proceedings began.[4]

As the British had entered into a treaty with Spain prohibiting the slave trade south of the equator, they considered it a matter of international Law that the United States release the Africans. They applied diplomatic pressure to achieve this, including invoking the Treaty of Ghent with the US, which jointly enforced their respective prohibitions against the international slave trade.

While the legal battle continued, Dr. Richard R. Madden, “who served on behalf of the British commission to suppress the African slave trade in Havana,” arrived to testify.[12] He made a deposition “that some twenty-five thousand slaves were brought into Cuba every year – with the wrongful compliance of, and personal profit by, Spanish officials.”[

Rebellion at sea and capture

Secretary of State Forsyth requested from the Spanish Minister, Chevalier de Argaiz, “a copy of the laws now in force in the island of Cuba  to slavery.”[13] In response, the Captain General of Cuba sent Argaiz “everything on the subject, which had been determined since the treaty concluded in 1818 between Spain and England”.[13]The Minister also expressed dismay that the Africans had not already been returned to Spanish control.[13]

The Spanish maintained that none but a Spanish court could have jurisdiction over the case. The Spanish minister stated “I do not, in fact, understand how a foreign court of justice can be considered competent to take cognizance of an offence committed on board of a Spanish vessel, by Spanish subjects, and against Spanish subjects, in the waters of a Spanish territory; for it was committed on the coasts of this island, and under the flag of this nation.”[

The Minister noted that the Spanish had recently turned over American sailors “belonging to the crew of the American vessel ‘William Engs'”, whom it had tried by request of their captain and the American consul. The sailors had been found guilty of mutiny and sentenced to “four years’ confinement in a fortress.”[

The Spaniards maintained that, even if it was believed that the Africans were being held as slaves in violation of “the celebrated treaty of humanity concluded between Spain and Great Britain in 1835”, this would be a violation of “the laws of Spain; and the Spanish Government, being as scrupulous as any other in maintaining the strict observance of the prohibitions imposed on, or the liberties allowed to, its subjects by itself, will severely chastise those of them who fail in their duties.”[13]

The Spaniards pointed out that by American law the jurisdiction over a “vessel on the high seas, in time of peace, engaged in a lawful voyage, is, according to the laws of nations, under the exclusive jurisdiction of the State to which her flag belongs; as much so as if constituting a part of its own domain. …if such ship or vessel should be forced, by stress of weather, or other unavoidable cause, into the port and under the jurisdiction of a friendly Power, she, and her cargo, and persons on board, with their property, and all the rights belonging to their personal relations as established by the laws of the State to which they belong, would be placed under the protection which the laws of nations extend to the unfortunate under such circumstances.”[13] The Spaniards demanded that the U.S. “apply these proper principles to the case of the schooner Amistad.”[13]

The Spanish were further encouraged that their view would win out when U.S. Senator John C. Calhoun and the Senate’s Committee of Foreign Relations on April 15, 1840 issued a statement announcing complete “conformity between the views entertained by the Senate, and the arguments urged by the [Spanish Minister] Chevalier de Argaiz” concerning La Amistad.[13]

The Spanish categorized the Africans as property to have the case fall under Pinckney’s Treaty of 1795. They protested when Judge William Jayconstrued a statement by their Minister as seeming to demand “the surrender of the negroes apprehended on board the schooner Amistad, as murderers, and not as property; that is to say founding his demand on the law of nations, and not on the treaty of 1795.”[13]

The Spanish pointed out that the statement Jay was referring to was one where the Spanish minister was “speaking of the crime committed by the negroes [slave revolt], and the punishment which they merit”. They went on to point out that the Minister had stated that a payment to compensate the owners “would be a slender compensation; for though the property should remain, as it ought to remain, unimpaired, public vengeance would be frustrated”.[13]

Judge Jay took issue with the Spanish Minister’s request that the Africans be turned over to Spanish authorities (which seemed to imply that they were fugitives instead of misbehaving property), because the 1795 treaty said that property should be restored directly to the control of its owners. The Spanish denied that this meant that the Minister had waived the contention that they were property.

By insisting that the case fell under the treaty of 1795, the Spanish were invoking the Supremacy Clause of the U.S. Constitution, which would put the clauses of the treaty above the state laws of Connecticut or New York, where the ship had been taken into custody, “no one who respects the laws of the country ought to oppose the execution of the treaty, which is the supreme law of the country.”[13] The case was already in the federal district court.

The Spanish also sought to avoid talk about the Law of Nations, as some of their opponents argued that America had a duty under the Law of Nations to treat the Africans with the same deference they would accord any other foreign sailors.

John Quincy Adams later argued this issue before the Supreme Court in 1841, saying,

The Africans were in possession, and had the presumptive right of ownership; they were in peace with the United States:…they were not pirates; they were on a voyage to their native homes…the ship was theirs, and being in immediate communication with the shore, was in the territory of the State of New York; or, if not, at least half the number were actually on the soil of New York, and entitled to all the provisions of the law of nations, and the protection and comfort which the laws of that State secure to every human being within its limits.[14]

When pressed with questions concerning the Law of Nations, the Spanish referred to a concept of Hugo Grotius (credited as one of the originators of the Law of Nations). Specifically, they noted that “the usage, then, of demanding fugitives from a foreign Government, is confined…to crimes which affect the Government and such as are of extreme atrocity.”