Success of individual Indigenous Australians should not distract from the deep structural inequality in Australia.(Supplied: Rirratjinga Aboriginal Corporation)

It is a laugh that defies the pain and struggle and grief of their daily lives.

This reconciliation week I was at dinner with a group of elders, women from Swan Hill in Victoria.

For me it was like being back home, these women were like the women who raised me, just like my mother or my aunties. They told me stories of their childhood, we mapped our families and found that some of them were personally related to me.

They told me about their fears for the future of their children and communities.

One woman told me how she cares for her disabled daughter and her husband sick with diabetes. 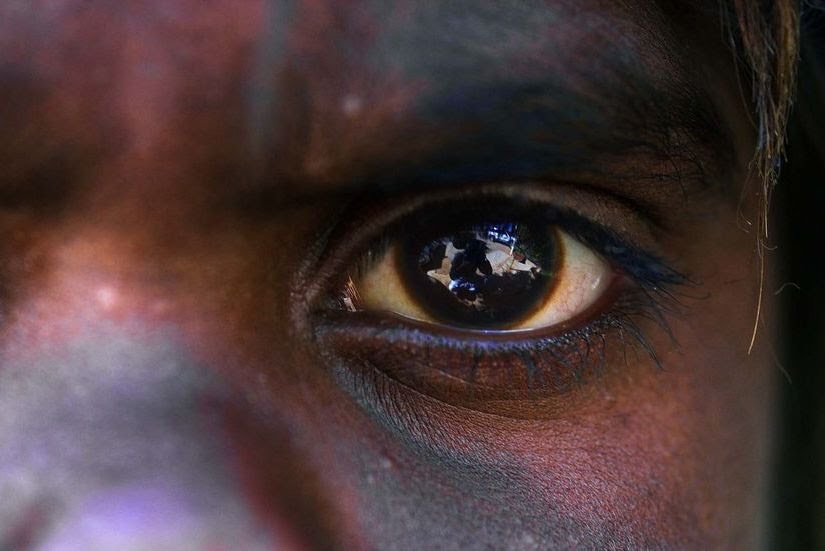 Another told me how her grandson broke a window in their house and she can’t afford to get it fixed.

Another told me of her son who died outside a nightclub in town last January. His body was left in the street for half a day as police carried out their investigations.

She told me her suspicions about how he died about who she believes may be responsible. There is a coronial investigation underway but she says she has little faith in the law.

These are the people we don’t see; the voices we don’t hear.

Grounded in truth: that’s been the theme of Reconciliation Week this year.

Here is the truth for far too many Indigenous lives: poverty, sickness, death.

They are lives measured in statistics: the lowest life expectancy; the highest imprisonment rate; the worst health, housing, employment and educational outcomes of any other Australians.

Of course they laugh; that’s all they can do.

Ken Wyatt was the first Indigenous Australian elected to the Lower House.(ABC)

Can Ken Wyatt make a difference?

Sitting with the elders of Swan Hill felt a world away from the politics of Canberra.

Scott Morrison has sworn in his new cabinet and made history by appointing Ken Wyatt as the first Aboriginal person to be Minister for Indigenous Australians.

The appointment of Ken Wyatt marks an important change that is as symbolic as it is potentially game changing, writes Isabella Higgins and Rhiannon Shine

I asked the women here what they thought about that and was met with a shrug of indifference. He will just do what the government tells him to do, they say. It isn’t cynicism; it is harsh experience.

Even that title, Minister for Indigenous Australians seems faintly absurd here: being Indigenous doesn’t feel anything like being Australian. These people are formed out of a long hard history of exclusion, segregation and discrimination.

These ladies, most in their late 70s, remember a time when they were told they were anything but Australian.

Ken Wyatt knows this. His story, his family’s story, would be all too familiar to the elders of Swan Hill.

He emerges from the Stolen Generations, those Indigenous people forcibly removed from their families at a time when Australia believed that the future for Aboriginal people would be to become “absorbed into the Commonwealth”: they would vanish, disappear become indistinguishable from any other Australians.

Mr Wyatt comes to this portfolio with the weight of his own history, the burden of expectation and the shrug of indifference.

He is a minister without a department, Indigenous affairs under the control of the Department of Prime Minister and Cabinet.

He inherits a legacy of failed policy. He is tasked with closing a gap that could seem as wide today as it ever has been. 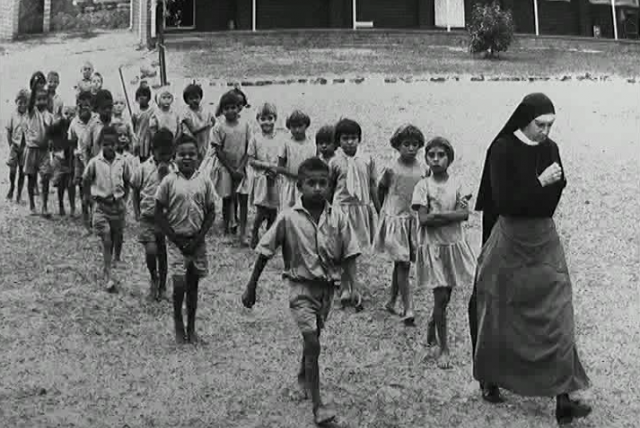 Thousands of Aboriginal children were taken from their families.(Supplied: Dumbartung Aboriginal Corporation)

There are inspiring stories too

Given the dimensions of Indigenous disadvantage it is too easy to overlook the great strides that have been made.

There are more Indigenous university graduates than ever before. I visited the Aboriginal Medical Service at Robinvale near Swan Hill and met one of the Indigenous doctors. Both doctors at the centre are Indigenous.

There are more Indigenous people in our Parliaments than at any time in our history. Mr Wyatt speaks powerfully to what can be achieved in Australia.

Yet, the success of individual Aboriginal and Torres Strait Islander people should not distract from the undeniable and deep structural inequality in Australia.

The elders of Swan Hill only reminded of how Indigenous people are born into an inheritance of trauma and inter-generational poverty. 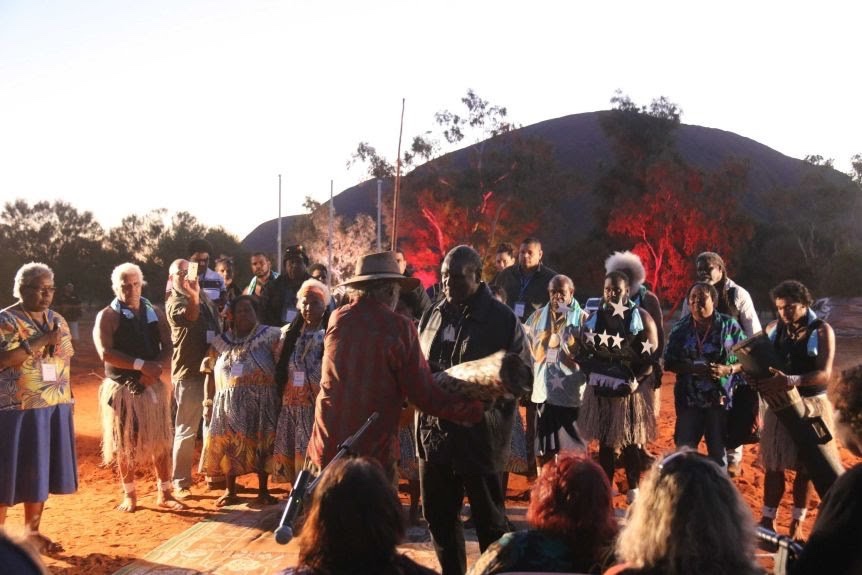 Aboriginal and Torres Strait Islanders exchanged gifts at the opening ceremony of the Uluru summit in 2017.(ABC News: Stephanie Zillman)

This is what the Uluru Statement from the Heart refers to as “the torment of our powerlessness”.

The Uluru Statement was the culmination of a national consultation with Indigenous communities and leadership to achieve constitutional recognition for First Peoples.

The centrepiece is a recommendation for an Indigenous representative body, a constitutional voice, to speak to Parliament and advise on government policy.

The Turnbull government rejected the idea, but Prime Minister Morrison has raised hopes of a pathway to a referendum. 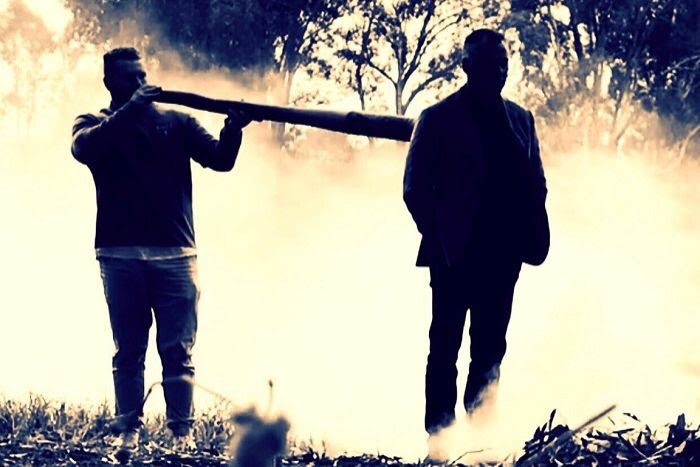 Stan Grant (right) was welcomed to country during a smoking ceremony delivered by Aboriginal elders in Swan Hill, Victoria.(Supplied)

Hope for the future

At the same time in Victoria, the process of treaty-making is underway.

There will soon be elections for an Aboriginal treaty commission.

If successful it will create history: the first time such a treaty has been signed in Australia.

This is what Indigenous people have called “unfinished business”: settling the legacy of colonisation.

Next year marks 250 years since Captain Cook, then Lieutenant Cook, claimed this land for the Crown. The commemoration is an opportunity to reflect on events of the 18th century and ask what is Australia in the 21st century?

Are we will still a country from which the first people of this land feel estranged?

In Swan Hill a group of men took me to the river for an ancient ceremony. They lit a fire and led me through the smoke to welcome me to their country and cleanse me of any bad spirits.

It is a ceremony that symbolises the struggle of this nation to find a place for its first people and cleanse itself of its past.

It is a ceremony Ken Wyatt knows all too well. abc.net.au