The Indian-head test pattern is a black and white television test pattern which was introduced in 1939 by RCA of Harrison, New Jersey as a part of the RCA TK-1 monoscope. Its name comes from the original art of a Native American featured on the card. It was widely used by television stations worldwide during the black and white TV broadcasting era before 1970. 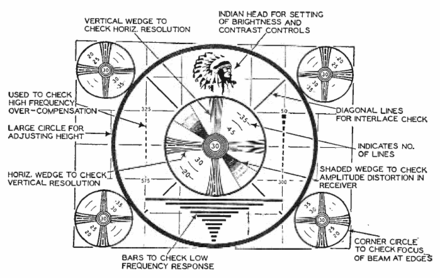 Indian Head pattern with its elements labeled, describing the use of each element in aligning a black and white analog TV receiver.

Indian Head pattern with its elements labeled, describing the use of each element in aligning a black and white analog TV receiver.

The graphic of the Indian and all of the patterns on the chart served specific purposes. With the chart many typical daily (sometimes hourly) adjustments on cameras, home, and studio monitors could be made. An experienced broadcast engineer could glance at the drawing of the Indian Chief and quickly know if everything was OK or if more careful adjustment was needed.

Within the chart the tools necessary to adjust perspective, framing, linearity, frequency response, differential gain, contrast and white level (brightness) are all provided. The grid and circles were used for perspective, framing and linearity. The tapered lines (marked with 20, 25, 30, and 35) were used for resolution and frequency response. The thin lines marked from 575 to 325 on one side and 300 to 50 on the other side referred to lines of resolution. The gray bands emerging from the center off to the lower right and upper left were for differential gain, contrast, and white level.

Only after the monitors were adjusted was an actual Indian-head test pattern used. A cardboard mounted lithograph of the test pattern was typically attached to a rolling vertical easel in each TV studio, to be videographed by each studio camera during test time. Then the cameras were adjusted to appear identical on picture monitors, by alternately switching between and comparing the monoscope image and the test card image. Such adjustments were made on a regular basis because television system electronics then used hot vacuum tubes, the operating characteristics of which drifted throughout each broadcast day.[citation needed]

Test patterns were also broadcast to the public daily to allow regular adjustments by home television set owners and TV shop repair technicians. In this regard, various features in the pattern were included to facilitate focus and contrast settings, and the measurement of resolution. The circular “bullseyes” in the centre and the four corners permitted uniform deflection yoke and oscillator amplitude adjustments for centering, pincushioning, and image size.

The test pattern was usually accompanied by a 1,000 or 440 hertzsine wave test tone, which demonstrated that the TV aural receiver was working. If the tone was pure-sounding rather than a buzz or rattle, then transmitted speech and music would not be distorted. 440 Hz is somewhat less annoying for technicians to hear for extended work periods.