Featured image: http://www.history.com/topics/world-war-ii/tuskegee-airmen
The Tuskegee Airmen /tʌsˈkiːɡiː/[1] is the popular name of a group of African-American military pilots (fighter and bomber) who fought in World War II. Officially, they formed the 332nd Fighter Group and the 477th Bombardment Group of the United States Army Air Forces. The name also applies to the navigators, bombardiers, mechanics, instructors, crew chiefs, nurses, cooks and other support personnel for the pilots.

All black military pilots who trained in the United States trained at Moton Field, the Tuskegee Army Air Field, and were educated at Tuskegee University, located near Tuskegee, Alabama. The group included five Haitians from the Haitian Air Force, and one pilot from Trinidad.[2]

The 99th Fighter Squadron was initially equipped with Curtiss P-40 Warhawkfighter-bomber aircraft. The 332nd Fighter Group and its 100th, 301st and 302nd Fighter Squadrons were equipped for initial combat missions with Bell P-39 Airacobras (March 1944), later with Republic P-47 Thunderbolts (June–July 1944), and finally with the aircraft with which they became most commonly associated, the North American P-51 Mustang (July 1944). When the pilots of the 332nd Fighter Group painted the tails of their P-47s and later, P-51s, red, the nickname “Red Tails” was coined. The red markings that distinguished the Tuskegee Airmen included red bands on the noses of P-51s as well as a red rudder; the P-51B and D Mustangs flew with similar color schemes, with red propeller spinners, yellow wing bands and all-red tail surfaces.

The Tuskegee Airmen were the first African-American military aviators in the United States Armed Forces. During World War II, black Americans in many U.S. states were still subject to the Jim Crow laws[N 1] and the American military was racially segregated, as was much of the federal government. The Tuskegee Airmen were subjected to discrimination, both within and outside the army.

Before the Tuskegee Airmen, no African-American had been a U.S. military pilot. In 1917, African-American men had tried to become aerial observers, but were rejected.[4] African-American Eugene Bullard served in the French air service during World War I, because he was not allowed to serve in an American unit. Instead, Bullard returned to infantry duty with the French.[5]

The racially motivated rejections of World War I African-American recruits sparked over two decades of advocacy by African-Americans who wished to enlist and train as military aviators. The effort was led by such prominent civil rights leaders as Walter White of the National Association for the Advancement of Colored People, labor union leader A. Philip Randolph, and Judge William H. Hastie. Finally, on 3 April 1939, Appropriations Bill Public Law 18 was passed by Congress containing an amendment by Senator Harry H. Schwartz, designating funds for training African-American pilots. The War Department managed to put the money into funds of civilian flight schools willing to train black Americans.[4]

War Department tradition and policy mandated the segregation of African-Americans into separate military units staffed by white officers, as had been done previously with the 9th Cavalry, 10th Cavalry, 24th Infantry Regimentand 25th Infantry Regiment. When the appropriation of funds for aviation training created opportunities for pilot cadets, their numbers diminished the rosters of these older units.[6] In 1941, the War Department and the Army Air Corps, under pressure — three monthsbefore its transformation into the USAAF — constituted the first all-black flying unit, the 99th Pursuit Squadron.[citation needed]

Due to the restrictive nature of selection policies, the situation did not seem promising for African-Americans since, in 1940, the U.S. Census Bureau reported there were only 124 African-American pilots in the nation.[7] The exclusionary policies failed dramatically when the Air Corps received an abundance of applications from men who qualified, even under the restrictive requirements. Many of the applicants already had participated in the late-December 1938 unveiled Civilian Pilot Training Program (CPTP), Tuskegee University had participated since 1939.[8] 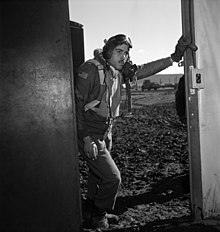