The Founders on the dangers of Judicial Activism

Did you know that the Founders foresaw the predicament under which we now find ourselves being oppressed by the United States Supreme Court and Federal Judges? They not only provided us with the ability to impeach judges; it was their opinion that either the Executive branch or Congress could overrule a Judicial opinion on the Constitutionality of any issue. President Thomas Jefferson even overruled a law that passed in Congress and was signed by the previous President, on the grounds that it was Unconstitutional. Hence, 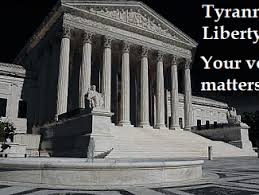 The good news is: the people of this country can throw off the chains of Judicial Tyranny and oppression, forced upon the majority of Americans since 1947, by electing Christians to Congress who are committed to taking the country back to its Christian roots and heritage.